The Escapists 2 goes to Space Prison

The new trailer for prison-break-sim The Escapists 2 introduces the USS Anomaly, it's first prison in space.

Coming at a time when everyone's favourite prison escape show is back on the air after almost a decade away, The Escapists 2 is on the horizon to let you put TV's finest escape plans into action.

Team17 is turning to The Escapists 2 as their second GDC reveal trailer of the day. It's all about the twos, here.

The Escapists 2 Coming Next Year With Co-op Play

With all the hot scoops coming from TwitchCon over the weekend, one such gem to shine through the pile was non other than a sequel to 2015 indie hit 'The Escapists'.

Team 17 and Mouldy Toof are again working together to bring the prison-escape sandbox to Steam, PlayStation 4 and Xbox One sometime in 2017. 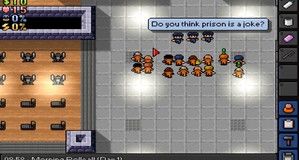