The Lord of the Rings: War in the North Summary

The Lord of the Rings: War in the North Review

Chris Capel does not simply walk into Dol Guldur.

This week's PlayStation Network releases are slim pickings, which is to be expected at this time of the year. The sole new major release is Anarchy Reigns, Platinum's new manic action title, which is available at a budget price of $29.99 USD.

Major Nelson has revealed the upcoming content coming to Xbox Live Arcade in the next two weeks, and it's highlighted by the long-awaited release of Croteam's Serious Sam 3: BFE on Xbox Live Arcade as well as content for the new release Forza Horizon and deals on Batman: Arkham City DLC.

The Hobbit film in the works will naturally need a tie-in video game for it to feel legitimate in today's transmedia world, and it looks like F.E.A.R.'s Monolith Productions will take on the shire.

Their latest release was this year's Gotham City Impostors for Xbox 360, PS3 and PC. It seems the second part to The Hobbit will be a WB Seattle affair. Snowblind 'virtually gone'.

The Lord of the Rings: War in the North Hints and Cheats

Below you'll find the latest tips and tricks for The Lord of the Rings: War in the North. Developed by Snowblind Studios, War in the North pits a Fellowship of three - human, elf and dwarf - against the evil forces amassing in the Northern Lands of Middle-earth.

The Lord of the Rings: War in the North Essentials 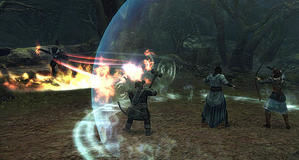