It may once have been given away as a free title, but now Viscera Cleanup Detail has made its way to Steam Early Access. You can now sweep up after violent incidents in a variety of sci-fi environments.

Viscera Cleanup Detail is an indie game just approved on Steam Greenlight where the player takes on the role of a janitor cleaning up after a messy alien invasion, picking up alien guts and putting them in the trash, and so on.

So, what happens when you mix it up with shooter Shadow Warrior, about a sword wielding modern ninja? 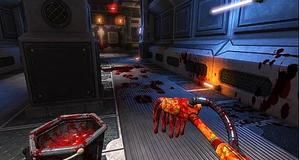