Volume, Mike Bithell’s sci-fi, stealth action retelling of the Robin Hood legend, launched today on Steam. To celebrate the release, the developer is offering a 10% discount until August 24.

Bithell's follow-up to indie platformer Thomas Was Alone is set in a futuristic vision of London, where master thief Locksley finds himself taking a stand against the corrupt and powerful Gisborne Industries.

Thomas Was Alone creator Mike Bithell has announced his latest game Volume will be coming to PC, PS4 and Vita by the middle of August. A new trailer teases more stealth gameplay.

Last year it was announced actor Andy Serkis (Golem) will be playing the role of Volume's antagonist. In many ways the game plays like the VR missions from the Metal Gear series.

This latest trailer showcases some of the enemy troops you'll come up against, and introduces the antagonist voiced by professional chimp impersonator Andy Serkis. 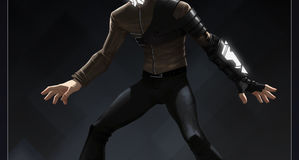