BlizzCon fever as hot as ever, first ticket block sold 'within minutes'

18 May 2009 | By Simon Priest
Blizzard knows how to make games, so it stands to reason then they also know how to throw a party about those games - fans agree this principle logic.

In fact they agreed so much that the first block of BlizzCon tickets that went up for sale on Saturday were sold in less than an hour. Is Grunty the murloc marine that popular? Yes.

"The first batch of BlizzCon 09 tickets sold out within minutes of going up for sale," reported VG247. The second batch will be available to fans on May 30th, so try and stay calm until then.

For attendees at the Blizz bash this year, which runs from the 21st to the 22nd of August, you'll be getting an exclusive World of Warcraft pet; Grunty. "This tiny terror is fully armored and comes equipped with a gauss rifle, which he’ll occasionally fire into the air to make sure no invisible spacecraft are swooping in to attack," say Blizzard.

Of course if you can't make it there personally then you could also opt for the Pay Per View on DIRECTV, what’ll have all the sickening levels of access to BlizzCon you'd expect. 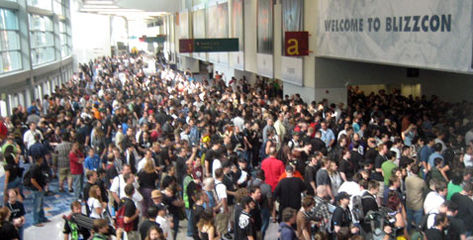