20 April 2009 | By Simon Priest
The studio behind the original Banjo-Kazooie arrival on XBLA dreams of bringing more of Rare's golden classics from Nintendo 64 to new gamers.

"We’d love to keep working with MGS and Rare so I guess just keep your fingers crossed along with us!" Burns told MundoRare in an interview.

"Stop ‘n’ Swop means different things to different people. When the BK and BT ports were conceived, SnS was only to be between BK and Nuts & Bolts, a simple reward system, in a modern day emulation of what the original cartridge swapping idea was supposed to do."

"Doing something with the much bigger Tooie was considered to be the mutterings of madmen, especially as that would require much deeper thought and preparation... But nevertheless as we all started to spec out Tooie it became more plausible especially as we had become quite comfortable with the code base," continued the studio co-founder.

"The Stop ‘n’ Swop legend is a monster amongst fans of the series; so, with that in mind, we hope people will enjoy and appreciate what has been done. We have implemented, under MGS and Rare guidance, the gameplay that completes the SnS journey; it is, as much as anyone can say, the ‘original plan’, and everyone involved thinks it’s cool."

"It’s certainly more than a reward system. Bearing in mind we cannot create new areas, gameplay or content, it wasn’t trivial to implement either."

Banjo-Tooie is scheduled for release over XBLA on April 29th, and will cost 1200 Microsoft Points. 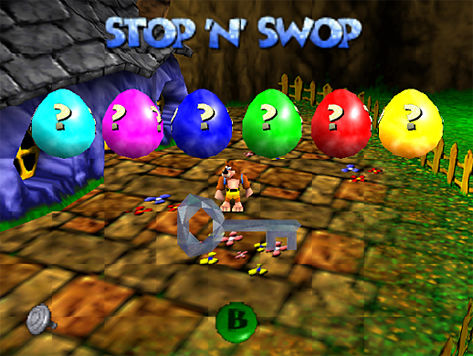