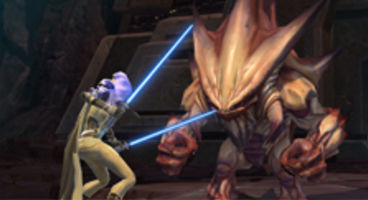 EA confirmed the release window recently. BioWare has also announced they're soon to be "selecting testers" from opt-in applicants for the beta.

An early 2011 date for the Star Wars MMO has been rumoured for a quite a while but many regard it as too soon for the highly ambitious project from BioWare, and that sometime in autumn next year would be more likely. We at least get a beta to play...

"We will be selecting testers from the Star Wars: The Old Republic community based on various requirements such as systems specifications, age, and region,” said BioWare. Signups involve a browser-based system scan of your computer specs.

“Because the testing program requires feedback from within the community, you must have an active Star Wars: The Old Republic community account to participate (no banned accounts)." There are no guarantees you'll be selected.

“Game testing for Star Wars: The Old Republic will be rolled out in several phases over an extended period of time. These test phases will begin with smaller, tightly focused test groups, and later tests will expand,” added the studio.

If you haven't already signed up then visit the official website. Star Wars: The Old Republic is very different from other MMOs - all NPCs have audio dialogue, each class has its own entire story arc with NPC companions to befriend and choices to make.

See below the developer interview between Gamespot and Dr. Ray Muzyka.