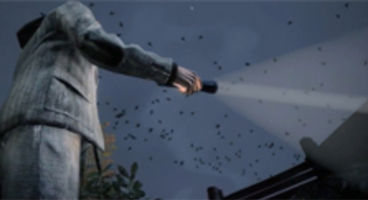 Already fans of Alan Wake can expect The Signal to arrive next month, with The Writer DLC sometime after that. Now a third is coming "later this year."

The Signal will echo the dream sequence says Matias Myllyrinne, where the environment looks real but "there's something off". It's out July 28th.

Remedy Managing Director Matias Myllyrinne told MTV that aside from the two named DLC packs, The Signal and The Writer, "we'll have a further pack coming later on this year." Myllyrinne also revealed what to expect from next month's first DLC.

It's best you don't read ahead if you hate spoilers.

The Signal takes place after the game's concluding scenes and will focus on the strange world that envelops Wake, with Myllyrinne saying "we won't be grounded in the realm that we inhabit right now," as in the "real world" of Bright Falls.

"We have a nifty way of moving forward and materializing that into gameplay and storytelling without going into a mode of weirdness. For a thriller to work you need it to be grounded in reality. Otherwise all bets are off because the rules don't really apply."

"So we wanted to have it kind of grounded in reality but also to take a more twisted take, because this is an extreme place and position he finds himself in," explains the boss.

The Signal releases July 28th for free if you managed to keep a hold of that redeemable code packed inside first-hand copies of Alan Wake.