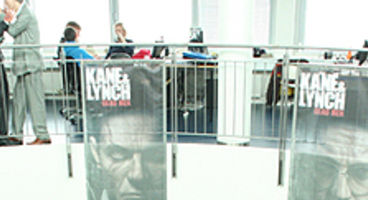 Some take advertising over reviews and vice versa, and some just browse a store and buy what looks exciting. Glad of mixed Kane & Lynch 2 scores.

"Well, of course marketing is very important," said IO Interactive general manager Niels Jorgensen. "The reviews are important for some people but others will just browse through the games available in a store or online and pick up whatever they think is exciting."

"If you look at some of the charts you'll find plenty of games in there that don't score so well on Metacritic so arguably that's a mixed thing." Kane & Lynch 2: Dog Days picked up a varied selection of critic scores.

"I think it's a game that you either love or hate," admitted the developer. "It's interesting that we have scores ranging from 1/10 to 9/10, so we have critics that really loved it and those that didn't really get it." The range doesn't dampen their spirits at IO.

"Actually, I think that's fine. I actually like the approach that you take some chances to reach out to an audience," he added. "People have different tastes in all kinds of media and we see that with music, films, books and also with videogames."

"It's about choosing an approach to give people entertainment and variety and I think we've been able to produce something that's a bit different, if not to everyone's taste."

Kane & Lynch 2: Dog Days released on Xbox 360, PS3 and PC. Check out what we thought of IO Interactive's latest offering in our review. Are you an 'ad or review' gamer?