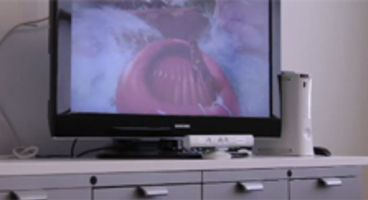 A US journalist has had some time with the river rapid action of Microsoft's River Rush for Natal, which was blabbed first by scribe James Gunn.

He blogged about it back in April but now, writing for Parade, a journo has got a clip posted up with his preview piece on the Natal launch title.

It involves us flailing our arms around was we try to paddle against the rapids, as the video from Parade shows, which also features Ricochet - the ball-hitting one. The Journalist, A J Jacobs, wrote that River Rush "my favourite, a real head-rush inducer".

The video shows both and he and his son playing with Microsoft's Natal. "I had to agree with Jasper when he said the technology is 'awesome'," he said, referring to his son.

"How revolutionary is it? Well, if the birth of Nintendo's Wii was akin to the invention of flight, Project Natal is more like the invention of the jet engine. It's not the first to the scene, but it's surely a game-changer," he reported.

Check out the clip below for some River Rush. It's likely to be at E3 next week.