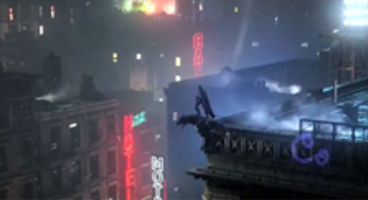 Rocksteady has said that Arkham City's footprint is "five times bigger" than that pipsqueak Arkham Island. Has "huge amount of navigational freedom".

Gamers can "go anywhere at any time" but there's always a "very clear idea" where you're needed. There's plenty of side action, "secrets, and street brawls".

"The footprint of Arkham City is about five times bigger than Arkham Island, but our primary intention was never to create a bigger gameworld just for the sake of it,” said game director Sefton Hill at Rocksteady Studios.

"In Batman: Arkham Asylum, we really focused our effort on creating an intense, pressure-cooker atmosphere by locking Batman in the madhouse and allowing The Joker to turn up the heat." The majority of the original game took place indoors.

"In Arkham City, we want to take that attitude to the next level, so we created an experience in which gamers will have a huge amount of navigational freedom, but they will also feel the extreme pressure of the challenges that they face," he said.

"Players will be able to go anywhere at any time, but we have made sure that players will always have a very clear idea of where they are needed most if they want to just stick to the core narrative path of the game."

"Explore the streets of Arkham City, and you will find many side missions, secrets, and street brawls, so players won't find it difficult to get into some trouble if that's what they are looking for." This isn't some GTA with Batman thrown in however.

"I wouldn't describe the game as "sandbox" because a totally open and free-form gameworld would not allow us to create the kind of atmosphere that we wanted to, but we don't hold your hand either," explained Hill.

"Arkham City is its own place; a massive superprison, jam packed with supervillains, thugs, and psychopaths. There aren't any rules, but it has a law of its own, and this is why it is a perfect setting for Batman. Gamers will have to think and act like the Dark Knight if they want to survive in a place like Arkham City."