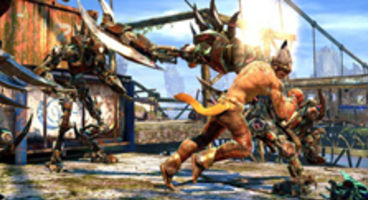 Ninja Theory's Enslaved: Odyssey to the West fell victim to the "very busy season" that is the run up to Christmas. Its quality "guaranteed a hit" say Namco Bandai.

It was the publisher's fault as they "didn't do a good job" calendar wise; it retailed in October. The quality "speaks for itself" as an "80+ rated game".

"To be perfectly frank, I think as a company prior to us reforming this organization, going to market, I think the game went to market at a very busy season. It launched in the midst of a busy holiday season. Last year, there were like 4000+ games for consoles," said Namco Bandai's marketing VP Carlson Choi in an interview.

"We didn’t do a good job finding the right time for it because when you look at the quality of the game it speaks for itself. An 80+ rated game is guaranteed a hit. We got DLC that came out that got 10 out of 10."

"Ultimately, I think that game had the quality needed to address the gamers. I think it’s a matter of getting into the market at the right time, which is something you will see us do much better." Does the future hold more Enslaved, or is Namco cutting their losses?

"You tell me, do you think gamers want more? I can assure you, a title like Enslaved, and every "title we’ve worked on in the past we’re going to re-examine them and say what is the potential for the game?" continued Choi.

"We’ve been doing a lot of studies, consumer engagement, and community engagement… let’s put it this way one of these days stay tuned there will be more news to come."

Have you played Enslaved: Odyssey to the West? Does it deserve another chance?