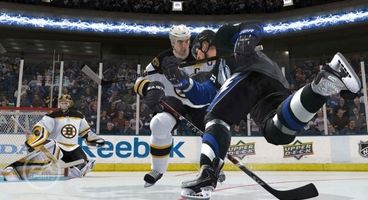 Electronic Arts has announced that their premiere hockey game, NHL 12, is now available for purchase on North American store shelves for Xbox 360 and PlayStation 3.

The Anticipation AI feature includes advanced AI where players will dynamically read plays and react to events as they happen. The Full Contact Physics Engine will take into account the size and strength of players to determine how players react when they come into contact with each other, making checking and collisions more realistic. Finally, with Dynamic Goalies, players can make contact with goalies as they crash the crease and goalies will battle through traffic in front of the net as they fight through screens to make difficult saves.

Also new to the series is the introduction of legendary players like Wayne Gretzky, Gordie Howe, and Mario Lemieux. The old school players will be integrated into the game across virtually every mode, including the all-new Be A Legend Mode, which is similar to NBA 2K12's own Legend mode, in whcih the player controls the career of various legendary players like Gretzky during every phase of their career. The all-new EA SPORTS Action Tracker during both career and Legend mode presents every major event that takes place while your character is off the ice. This feature will allow gamers to spend less time watching from the bench and more time playing, while still being aware of the game situation as they step back onto the ice for their next shift.

Finally, NHL 12 includes Hockey Ultimate Team, a virtual card collectible game in which players earn hockey player cards, which adds those players to their virtual team to compete with other online gamers. The popular feature was introduced in NHL 11.