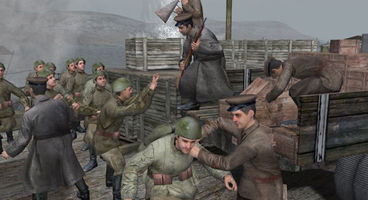 Eventually they managed to produce something so stark in contrast to Medal of Honor, and other first-person shooters at the time, they Call of Duty rocketed to success.

"It wasn’t just Medal of Honor we were wary of being similar to, because most of the World War II games at the time followed that formulae, like Return to Castle Wolfenstein, which was kind of a super-spy in WWII story," recalled Call of Duty lead designer Zied Rieke, who had worked on EA's Medal of Honor.

“During the first year of Call of Duty development, the game was much more like Allied Assault. There was a James Bond-like character, doing a secret mission to stop the Nazis developing a nuclear bomb. There was a German scientist, and a German scientist’s daughter. Medal of Honor was a ‘James Bond in World War II’ kind of game, and that is what we were pretty much making." Fortunately they managed to throw off those formulaic traps.

It was former Infinity Ward artist Justin Thomas that revealed the 'MOH killer' codename. Today Activision's Call of Duty dominates the FPS market with Medal of Honor retired by EA after failing to make a comeback. Nowadays it's Call of Duty accused of cookie cutter formulas and doubtlessly there are a few 'COD killer' projects out there.

Check out the full MCV write-up on the early days of Call of Duty, the Medal of Honor slayer.