Call of Duty 4: Modern Warfare is exactly what the Call of Duty franchise needed. An exquisite title with an awe-inducing single player campaign, fast paced and exciting multiplayer.

According to a survey Activision has been emailing players, the publisher is considering forgoing new IP's completely and focusing solely on Modern Warfare, Black Ops, and surprisingly, WWII.

The polling consumers of retailer Amazon have spoken, or rather voted. Bethesda's The Elder Scrolls V: Skyrim managed to beat Naughty Dog's The Last of Us in a tournament for 'Generation's Greatest Game'.

Vicarious Visions, a subsidiary of Activision, was for a time working on a tactics-based Call of Duty instalment. This spin-off was discovered via a studio animator's online work portfolio.

A brief clip showed a WW2-set prototype that was in development for Xbox 360, PS3 and PC. It took place in 2009 but it's unclear how long it went on for. Vicarious turned to Spyro.

Sony has announced their Spring Fever 2012 PlayStation Network update, which will highlight some new PSN titles, as well as special offers and discouints. PlayStation Network Plus members will get early access on games and up to 75% discounts on selected titles. 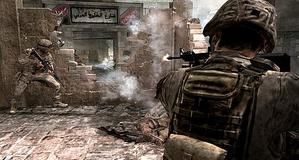