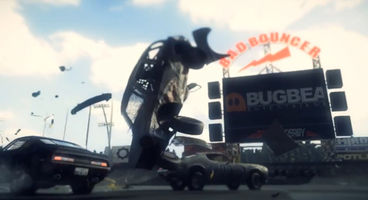 Bugbear Entertainment is launching their own crowd funding campaign for something they call 'Next Car Game', with the beginning Weekend Smasher tier at $25 for the racer, which is due in early spring.

They would use Kickstarter but Finnish law frowns on "raising money for commercial purposes" and so they launched their own pre-order page. They implore fans not to hold out.

A "playable sneak peek" will go out once they hit 10,000 pre-orders. It's the "reckless racing" and "ferocious wrecking fests" inspiring Next Car Game.

"Did you love the over-the-top, reckless racing action of the FlatOut series? Or the ferocious wrecking fests of the Destruction Derby games? We did too!" cries Bugbear's Next Car Game website.

"What if you could somehow relive those glorious moments, mixed with some serious Street Rod inspired vehicle upgrading and spiced up with fierce online races where players can battle it out with their tricked out bangers?"

"Now THAT would be something," they continue.

"If you’re familiar with the original FlatOut experience, you already know what we’re aiming at: exhilarating racing action with sophisticated physics and damage modeling, only this time we’re upping the ante on almost every front. This is the game we envisioned way back in the early 2000s, only re-imagined for today’s technology and gaming standards."

An early access version is due later this year while the full game is expected in early spring 2014.

"We wanted to do a Kickstarter!" swears Bugbear in their FAQ. "But it turned out to be tricky for non-US-citizens, and Finnish law prohibits raising money for commercial purposes. We still wanted to show everything we’ve got right now, so we chose to set up our own pre-order site immediately!"

"If you’re thinking of holding off purchasing until the possible, speculative Kickstarter – please don’t! We’re sure we’ll make it worth to you to jump onboard immediately." Check out the Next Car Game pre-order page for more.