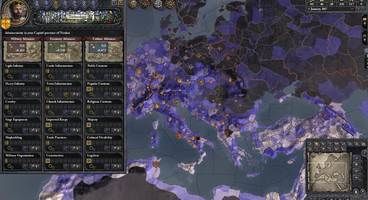 A sampling of the tech trees.
The third and final developer diary for the Crusader Kings II: The Old Gods expansion has been released by Paradox Interactive, and discusses the technological development that occurs in the time span of the game.

According to the developer, "Now all rulers of duke rank and above generate technology points in three categories based on their stats: martial gives military, stewardship gives economic and diplomacy gives cultural technology points. The ruler can then spend these to increase the technologies of their choosing in their capital. In addition to the stats, combat gives military points, universities give economy points and religious schools cultural points.

This means however that technology will only grow in the capitals of dukes and above, and for the rest of the world it will spread as usual."

Check out the dev diary in the video below. The Old Gods expansion comes out on the 28th May 2013. 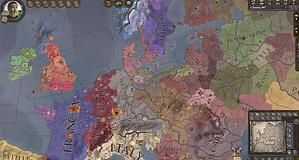