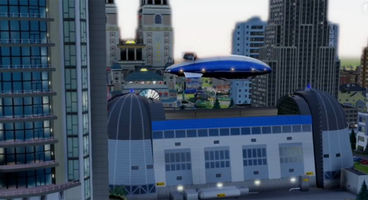 With EA Maxis working on the big 6.0 update they've released some new DLC in the meantime. It's the Airships Set which adds a rigid airship transport system to the city that completely ignores all that pesky road traffic.

In fact it will connect any cities together that build the hubs - transporting tourists and commuters between them. The Airships Set also adds hot air balloon parks. It also costs £5.99.

There's no free meal with SimCity as EA once again slap a questionable price tag on DLC for the troubled town city builder. It's at least cheaper than the usual £7.99.

"Don't let traffic woes weigh you down! Take to the skies! Float tourists into your city with the Airship Hangar or add the Commuter Airship Mooring to help the morning commute. Your city will soar to new heights with enormous airships drifting through your city. Two included Hot Air Balloon Parks will lift your Sims' spirits and raise the neighborhood's land values. Gasp in wonderment as lumbering blimps hover above your stadiums during events. Fill your city with airships with the Airships set and see your city really take off," reads the blurb.

Ultimately it's something of a bitter pill to swallow for SimCity Mayors as you basically have to pay money in order to benefit from DLC circumventing a flawed game mechanic; city traffic. EA Maxis has posted a 'SimCity Airships Set Overview' video to explain the role of these new buildings.

Apparently the Airships Set is worth about one fifth of the entire game's price.