12 August 2014 | By Nick Horth
Danish indie studio Full Control has announced that an enhanced standalone version of its boardgame adaptation Space Hulk will be coming to PC in the fourth quarter of 2014.

40K pin-up boys the Ultramarines are the new chapter, and though there's no concrete details on what form it will take, Full Control are also promising a squad management and skill progression system that will let you customise your squad of burly super-soldiers. There's even a couple of new toys - combi-weapons and the mighty cyclone missile launcher, which for those who've never played 40k is basically a Katyusha rocket launcher strapped to a man's shoulders. Subtle.

The coolest part for me is the enhanced cosmetic customisation options. This is Warhammer 40K after all. My troops need to look stylish.

"In Space Hulk Ascension," says Full Control CEO Thomas Hentschel Lund, "we have kept the core elements of Space Hulk that make it such a unique nerve shredding experience, but we have added new content and features, which take the game to a whole new level. It is a new and intense experience that will blow the minds of both new and old players."

Space Hulk: Ascension Edition will be coming to PC in Q4 2014. 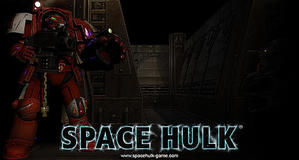