16 May 2014 | By Simon Priest
Frontier has just updated Elite: Dangerous with Alpha 4, which marks the final phase in the alpha with the space game officially moving into beta by the end of May. Five star systems can be explored in Alpha 4.

Elite now opens up with "total freedom" to trade, pirate and bounty hunt across the stars. Five ships are now pilotable. Alpha purchases are now closed for Elite: Dangerous.

However you can still help Frontier and play Elite early by purchasing the Elite: Dangerous Premium Beta, with gives access to single player combat with multiplayer this May 30th. 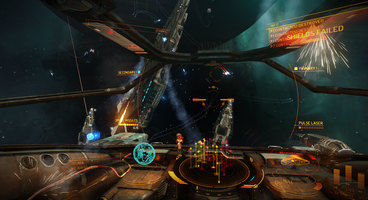 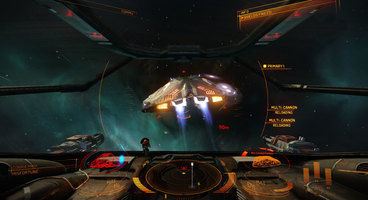 "Elite: Dangerous Alpha 4 offers total freedom as you trade your way through the star systems, pirate, hunt for bounties, and become immersed in exploration and combat with a choice of ships and weaponry," announces Frontier.

"Explore five star sytems, centred around the Boötes constellation, with two additional methods of travel make their full debut in Alpha 4; super-cruise for accelerated within-system travel and hyperspace jumps for travel between systems. There are also new ships available to pilots, including the Anaconda."

"The five Alpha 4 star systems are themselves set within 400,000,000 star systems of the Milky Way galaxy, all of which are moving correctly; spinning and orbiting in an incredible ballet. Whilst exploration is currently limited to the five Alpha 4 systems, the ‘night sky’ is accurate wherever you travel."

Trade between star systems is now active for the first time with the economy dynamically evolving to supply and demand. The Elite: Dangerous Premium Beta package is available through the official website for £100.

Check out a recorded live stream below of Elite: Dangerous' multiplayer scenarios.