StarCraft Ghost "still perfectly viable," Blizzard unsure if it would ever pursue it 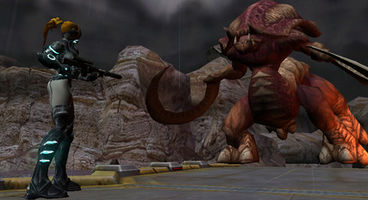 Blizzard producer Alex Mayberry teased that third-person spin-off StarCraft Ghost is something still on their minds at the studio, but he doesn't know "if we'll ever do it but I think it's something we'd like to do."

StarCraft was announced to be getting a spin-off over 10 years ago, and it was Blizzard's first major push onto consoles, but tech limitations meant they 'weren't ready'.

Mayberry teased the remote possibility of StarCraft Ghost of seeing the light one day as this week debuts Diablo III: Reaper of Souls for PC and PlayStation 4.

"I think the idea is still perfectly viable," Mayberry remarked. "I don't know if we'll ever do it but I think it's something we'd like to do." Diablo III is Blizzard's first big push into console development and Reaper of Souls is their first simultaneous PC and console launch. StarCraft Ghost was floated around during the PS2 and original Xbox era.

"When we set out to do it originally we were GameCube, PS2 and Xbox," Mayberry continued, "and after we shelved that I used to say that at that time we were very ready to make a Blizzard game on consoles but those consoles weren't ready for a Blizzard game. We just couldn't quite get what we wanted to do just because of those machines at the time."

Surely Xbox One and PlayStation 4 is bulging with enough power? What about the plucky PC?

"I don't know," he adds. "Maybe some day we'll take another look at that but I don't think it'll be any time soon. I think it's an idea that still lives inside the halls of Blizzard." Reaper of Souls releases tomorrow, March 25th.