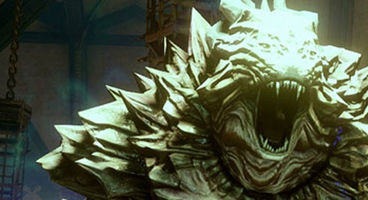 BioWare has acknowledged the existence of multiplayer in the upcoming and now November-bound Dragon Age: Inquisition. It was almost inevitable after Mass Effect 3's online success.

The studio pledged multiplayer is entirely separate from single-player, and features four-player co-op quests for a "fun dungeon-crawling experience" all in real-time.

The multiplayer doesn't have its own campaign, and all MP characters as treated as agents for the Inquisition, but they have no literal impact on single-player stories.

Gold is earned to pay for things in multiplayer but there is Platinum for those who'd rather spend actual monies and skip gold farming. "Our philosophy for MP’”and we are adamant about it’”is that you can buy anything with gold coins, which is the currency you get from dungeon-crawling. There will be no pay wall," reads the official FAQ.

"We wanted to give Dragon Age fans the opportunity to play with their friends for the first time in the franchise," said BioWare. The MP action plays out entirely in real-time so there's no tactical pause like in single-player. The team also promise there isn't any content sealed away from the main campaign behind multiplayer.

"In Dragon Age: Inquisition, we wanted to focus on five key aspects: Open World, Story, Characters, Visuals, and Inquisition. We also have a new engine (Frostbite 3), and we had to create many new tools to support the huge amount of cinematics and localization that a BioWare title requires. A full MP campaign would have been another layer of complexity, and we decided it wasn't the right time for the franchise to take on that feature."

Instead we'll have generated dungeons to crawl through with crafting a "key element of progression."

"Through crafting, you will be able to create new items that will make you better at fighting. There is some overlap between SP and MP recipes, and some are exclusive to one mode or the other. Crafting also lets you create new armors. If you craft a set of Alchemist Armor, you unlock that character, who can then open up a lot of possibilities on MP missions. You can also craft new armors for characters you already own. They will give your character a new special look but no extra stats. In SP you gather materials through exploration. In MP you salvage items to get them."

BioWare's multiplayer in Mass Effect 3 proved a surprise hit with a portion of the community, but it was criticised for having an impact on the single-player campaign. BioWare is keen to avoid this controversy again and so the Inquisition marches alone and only to the beat of its Inquisitor.

This also means items for single-player and multiplayer are kept apart so as not to disrupt each other’s economies, explains BioWare. "If you play Dragon Age multiplayer, you will learn how each class plays a different role in combat, how different skills work, and how your party composition can give you a tactical advantage on the battlefield. This knowledge is transferable to SP, but items are not," the FAQ continued.

Dragon Age: Inquisition has been pushed back to November 18th for PC, Xbox 360, PS3, Xbox One and PS4. It's powered by DICE's Frostbite 3 engine and allows for huge open areas to be explored and populated. Check out the newly posted Multiplayer FAQ on the official website for more details.