A first-person, roguelike shooter set in a universe where reality is falling apart, Sublevel Zero offers Descent-style blasting with added looting and crafting.

“Sublevel Zero has been inspired by our favourite games of our formative years like Descent, Forsaken and modern shooters like Teleglitch," syas Sigtrap designer Luke Thompson. "We wanted to blend retro and modern elements through the visuals, mechanics and audio and the awesome music composed by Will Bedford intensifies the gameplay experience. Sublevel Zero is a game we want to play and we’d love for fellow gamers to share in that experience. We’re thrilled to finally be revealing Sublevel Zero to the public!”

Sublevel Zero was originally created for indie game jam Ludum Dare. It's got a neat lo-fi art style and a chiptune soundtrack by composer Will Bedford, giving it that classic 90's look and feel. Looking at it makes me incredibly nostalgic for the original Descent, which was one of the first games I ever played. Should you wish, you can even play it using an Oculus VR headset, though I imagine what you'll get if you do that is EXTREME nausea.

Sublevel Zero is set for release in summer of this year. It's looking (and sounding) pretty darn cool. 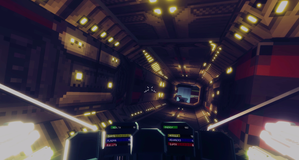