Storm Icecrown Citadel As Immoral Death Knights In Hearthstone: Knights Of The Frozen Throne Next Month 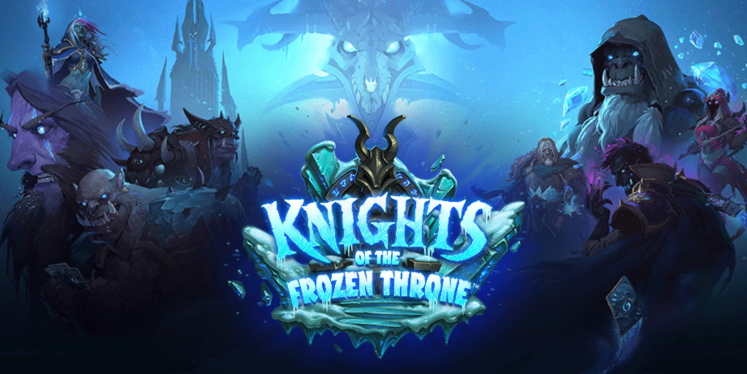 As early rumours managed to guess yet again, Hearthstone players will soon leave the tropics of the Un'Goro crater for the chilly breeze of Northrend - Hearthstone: Knights of the Frozen Throne launches next month.

While we can imagine the vast majority of Heartstone players come from a Warcraft background, it's reach as a fairly simple CCG, and a mobile game to boot, there's likely those who have no idea what this all means. You're heading into land of a bad guy who used to be a good guy; although depending on the timeline here, it could be a good guy that's still technically a good guy. Maybe.

The newest expansion introduces the Death Knight mechanic - 9 new cards (one for each class) that modify your Hero power by way of the Lich King's ancient, runic magic. Lifesteal - a word everyone's heard of at some point - becomes a fairly self-explanatory 'keyword' in the new content pack. You'll dish out damage to be healed by either the full amount, or a fraction of what was taken away.

Back In March, Hearthstone Card Pack Prices Were Above Their Usually Pricing Tiers

But it wouldn't be Hearthstone without a solid story in place. Hardly on a noble mission by any stretch of the imagination, the Lich King has called for new recruits to imbue with his treacherous magic. Our heroes are ready and willing to traverse up the Icecrown Citadel in pursuit of said power - while plotting to take the Throne for themselves. Just like in the World of Warcraft days, Icecrown Citadel is a vast labyrinth teeming with favorite bosses like Sindragosa and Professor Putricide waiting to call off the whole arrangement. Get to the top, however, and you'll be facing off against the man himself.

With 135 new cards arriving just in time, we're to see the return of the $49.99 50-pack bundle for those looking for a head start once it all kicks off. Without throwing down the cash, however, these new card packs will be awarded in the Arena mode.