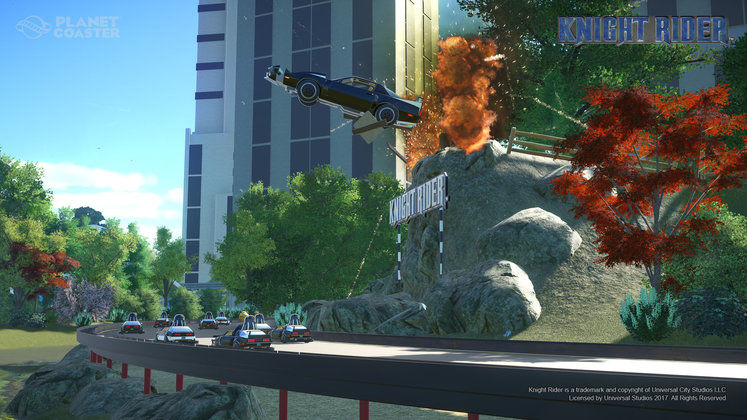 Planet Coaster has had a good first year. With seasonal updates adding a plethora of new features and rides, modders and creative fellows have been able to build the rest with the game's simplistic modelling tools.

With the Summer update only recently behind it, Frontier Developments have finally begun to put out paid content packs for those looking to add a little more real-life theme to their parks.

Three new downloadable content packs have arrived at the same time, all focusing on cult-classic film and TV. Following similar collaborations with both Rocket League and Lego Dimensions, the Back to the Future franchise makes its Planet Coaster debut. In the TV spot, David Hasslehoffs Knight Rider and the 1960's macabre sitcom The Munsters.

The iconic DeLorean makes an appearance in both its classic and 2015 re-imagined style, while both KITT and KARR roll in from Knight Rider. For fans of The Munsters, you'll be able to build scale replicas of both the Munster Koach and DRAG-U-LA. Each car will available with multiple designs and scales to fit their decorate purposes.

Of course, usable versions are available to place on your Go-Kart circuits, too, with a number of additional scenery pieces to inject a little more Hollywood into your pack. They'll set you back £1.99/$2.99 per pack on Steam.