Crusader Kings 3 Guide - How to Vassalise the Pope

This guide for Crusader Kings 3 explains how you can turn that pesky Pope into a powerful pawn. Be forewarned though, a rich Papacy can and will wield a huge amount of mercenaries, so make sure you are prepared for a war with the richest power in the old world. 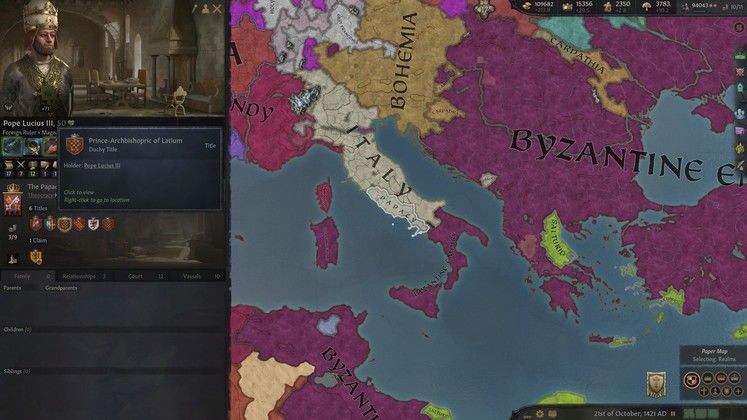 The Pope is a king level title, so before you can offer him vassalage you will need to be emperor rank. He will also be unlikely to accept unless you are also his De Jure Liege, which usually means holding the Kingdom of Romagna along with your empire title.

This works because as well as holding The Papacy (which you can't technically vassalise), the Pope holds the title of Prince-Archbishopric of Latium. With Romagna under your control, you gain a De Jure claim on that title and can press it to vassalise him with the De Jure Duchy Casus Belli.

Despite controlling the Pope himself, your taxable earnings come only from his titular titles (the counties he controls directly or through his own vassals) and not from the Church funds collected from across the Catholic world. This means you won't see much more money than any other Theocratic Duchy.

Note: If the title has previously been destroyed by external forces, an emperor can restore The Papacy as a vassal of themselves through a decision.

For our full thoughts on Crusader Kings III, check out our review. In addition, you can search GameWatcher for guides on topics like culture and innovations, succession but also faith and fervor.