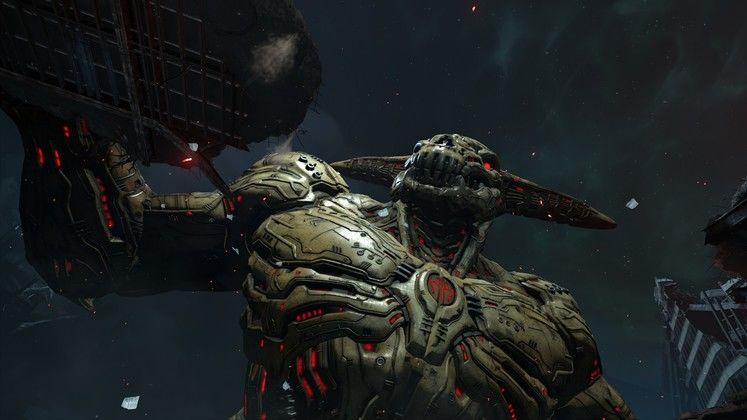 Doom Eternal's final boss sees the Doom Slayer battling his biggest foe yet as he takes on the colossal Icon of Sin.

While the name might ring familiar to anyone who's played Doom 2, the Icon of Sin requires a different strategy this time around. Here's everything you need to know about defeating Doom Eternal's final boss and its ending. 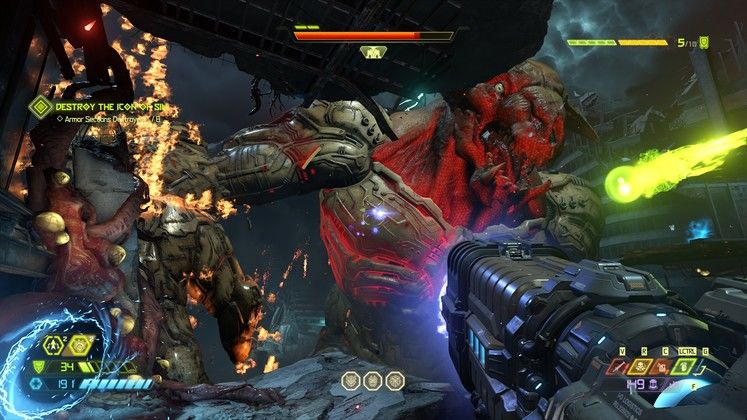 Defeating the Icon of Sin in Doom Eternal involves breaking off eight body parts by shooting them. The fight has two phases: one in which you slowly tear off the final boss' armor and another where you rip apart the flesh from the very same body parts.

The body parts that can be damaged light up red when shot and explode when destroyed, making it obvious when you need to focus on a different section of the boss.

The Icon of Sin will alternate between shooting projectiles in long bursts at you, slamming the area in front of it and punching you with its massive fists, which leaves behind patches of fire on the ground of the two-floor building you find yourself in.

A mixture of movement and taking cover while peeking out to fire in short bursts is the best way to handle the projectile attacks.

The fist slams can be avoided by not spending a lot of time right next to the Icon of Sin, while the punches require some foresight and swift dashing to the side.

You'll have access to your full arsenal of weapons during the final boss fight and using the BFG, minigun, plasma gun and rocket launcher will definitely make your life easier. That being said, you won't be facing just the Icon of Sin.

Demons will spawn in on both floors of the building, significantly upping the challenge while also acting as sources of ammo. They come with the same weak points as in previous missions and, on top of that, Crucible ammo spawns frequently in set spots around the building.

Using the Crucible to dispatch the demons you're usually having trouble with can make the difference between beating the boss and restarting the fight.

Staying on the move and using portals and jump pads to alternate between the building's two floors is very much key to lasting long enough to reach the second phase, let alone defeat the Icon of Sin.

Doom Eternal's final boss fight can be rather lengthy, so it's best to approach it as a battle of attrition – you are fighting a massive demon that's able to decimate entire planets after all.

Doom Eternal's ending stars a weakened Icon of Sin resting its arms on the building, which gives the Doom Slayer an opportunity to climb it and lodge his Crucible's blade into its brain before breaking it from the weapon's hilt – the sole way of ensuring it doesn't wake up again.

Defeated, the Icon of Sin's inert body crashes down below as the Doom Slayer confidently walks away from the scene of the battle. In the background, King Novik reasserts that the Slayer is humanity's only hope and that his fight against Hell's demons is eternal.

For more help with Doom Eternal, check out our secrets guide covering the Taras Nabad and Cultist Base levels.