Warframe Hostile Mergers is only the latest in a long line of successful Operations that the game's had over the years, and it's a boon. With a fun and engaging new game mode, and rather fantastic rewards (Spectra Vandal, Glaxion Vandal), we must suggest you wrap it up in full.

Hostile Mergers Operation has already started, and will last until 3rd of June, 2 PM ET. You're going to have to do a few things right to get all the rewards, all of which you can read just down below. 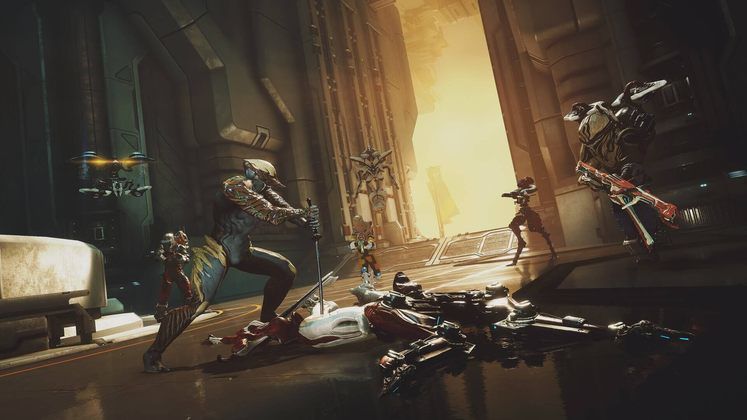 Playing the new Disruption game mode is easy - just go to the renewed Jupiter and visit Ganymede, which will kickstart your first Disruption-type mission. Facing the newly-minted Amalgam Sentient/Corpus hybrids, you're going to have to finish four Mobile Defense-ish objectives per each rotation of Disruption.

How it works is that, once you kill an enemy that drops a Sentient key of particular colour, you need to follow the appropriately-coloured icon on your HUD until you find the odd, organic-looking growth in the colour of your key. Insert the item, and then you'll have to defend said growth/console from the Amalgam onslaught.

Each growth/console buffs the Amalgam in some way, so be sure to come very well-prepared or with a crew of Tenno to back you up. Beware of Demolysts - special Amalgams that can, after a short charge, destroy the console outright, setting you back partially.

To unlock all of the Personal Rewards for this Operation, use your World State window in the upper right corner of the Star Map to start each of the given Disruption missions. There are three of these, each of which will unlock a reward:

When you're through, though, you'll also unlock the Disruption Endurance mode, which is an endgame-level version of Endurance, through which you can also get the following rewards:

Clan Leaders may also wish to organise their Clans to unlock the special Operation Trophies, details on which you can find in the game itself.