Will Harry have the magic formula this November?

15 October 2010 | By Richard Walker
When we were told that we were heading out to Epping Forest in the Northwest area of London, to see the obligatory Harry Potter video game tie in for the latest movie coming later this year, we never imagined that we'd actually have to walk down a muddy tree-lined path to find the venue nestled amongst the leafy canopy.


It's an appropriately surreal and slightly magical backdrop for Harry Potter and the Deathly Hallows – Part 1 – The Video Game, to give the game its full title, which is setting its sights on a market that has grown up with the books and movies. So, Harry is getting a lot darker to reflect the increasing maturity of a story that has developed alongside its audience over the years and consequently, Deathly Hallows the game is assuming the form of a third-person shooter in essence.

The only exception here is that where most third-person shooters put guns in the hands of its heroes, Harry wields his trademark wand, casting spells at his enemies instead of firing bullets. Without giving away any spoilers, Harry is on the run (don't worry. That's all we plan to say about the story) so he'll have to rely upon his wits and the power of his spells more than ever.

Mr. Potter will gradually unlock eight different spells during his journey, the first of which is 'Stupefy'; a simple offensive spell that Harry can use to zap enemies with fizzing, incendiary blue projectiles. For the purposes of our hands-on demo however, we're given access to all eight of Potter's spells, so that we can get a proper taste of the teenage wizard's powers.

Starting with a brand new, as yet unseen level set among the black corridors of the Ministry of Magic, we need to try and get Harry through to an atrium, where we can either stealth our way through with the invisibility cloak or forego the sneaking in favour of some offensive spells. Snatchers patrol the corridors on the lookout for Harry, so when you're under the cloak, the view shifts into first-person to give you a better idea of your proximity to the skulking guards.

As you move with the cloak, there's a Hallows icon in the corner that gradually burns away, and if you get too close to an enemy, the triangular symbol is expended faster. The key then is to move slowly, stop to let the cloak recharge and give the bad guys a wide berth or you'll be forced to engage in a fight with the Snatchers and possibly a few Dementors who drift through the corridors looking for happiness to suck away from anyone hapless enough to get too close.

Upon reaching the atrium, there's a boss battle as the area is closed off by a Patronus spell and this part of the demo draws to a close. Next, we move onto some of the challenges – of which there will be 22, each with online leaderboards and support for co-op – and we get to sample two of the three different types planned for the game. First up is a sequence following a wedding in the movie (a quite important bit, apparently), which drops Harry right into the thick of the action against more Snatchers in the middle of a field.

Using bales of hay for cover, we cycle through different spells to use against the numerous enemies in a Time Attack challenge. Casting a Confundo spell is a good way to start, as it temporarily turns an enemy against the others, meaning you've one less to deal with and the help of an extra spell caster. Expelliarmus is also perfect for disarming the Snatchers, while a Confringo spell is the equivalent of Harry's machine gun, dispensing rapid fire bolts of red magic that make short work of multiple enemies.

When your health gets low, there's a context-sensitive option to tap A and drink a Murtlap Essence potion and there's also the ability to throw various potions at enemies like grenades. Harry can also consume a Felix Felicis potion that increases his luck in tough situations, causing enemy spells to miss him completely, buying you time to rethink your strategy. It's apparent from this challenge that all of the key components of a third-person shooter have made it into the Deathly Hallows, with a cover system, different weapons substituted for spells accessed via a radial menu and even potion grenades.

We're given a second Time Attack challenge, which plays more like a Horde mode, delivering Snatchers in waves. Situated in what appears to be a trailer park, we find cover behind a sheet of corrugated steel, which gets quickly smashed apart as the Snatchers rush in aggressively. Again, a Confundo spell works wonders and an Impedimenta spell – being the same magic the Snatchers use – counters the onrush of attackers. Petrificus Totalus is also useful for slowing enemies down with a blast of icy shards and the old classic Wingardium Leviosa lets us pick up one of the steel sheets to use as a makeshift shield.

Fighting through the waves becomes quite compulsive and after failing miserably a few times, we're determined to succeed on our third or fourth attempt. Soon, we're hitting headshots, using exploding potions strategically and mixing up the spells to hold back the waves until we manage to tally a decent, respectable score. Protego is also indispensable when Snatchers get up close as it's Harry's blocking move that can also be used as a kind of melee attack to momentarily strike enemies to the ground.

With the hands-on drawing to a close, we manage to get time with one of the Deathly Hallows' Kinect challenges, wherein you use different hand motions and positions to cast various spells, while an underarm motion throws an explosive potion. It's entirely on rails, but it's good fun nonetheless, as you aim an incendiary Expulso spell at the Death Eater enemies as you're funnelled through the ruins and grounds of what appears to be an old temple. This Kinect aspect will likely be little more than an added diversion, but it's a nice little bonus that's also fun nonetheless.

Harry Potter and the Deathly Hallows – Part 1 The Video Game is looking like it'll be exactly what the discerning Potter fan might be after when the movie hits the cinemas in November at almost exactly the same time as the game. There's all the elements of a traditional shooter, including deeper aspects like XP and upgrades that reward progress. There appears to be more to this than the usual movie tie-in dross that we've seen in the past, but that's going purely on the strength of a good first impression. Maintaining enough depth, variety and interest to entertain casual and more seasoned gamers alike will be the Deathly Hallows' most difficult trick and it's something we hope the game will succeed in pulling off.

Most Anticipated Feature: Stringing together all of the different spells once you unlock them all. You're a wizard, Harry. Now go kill! 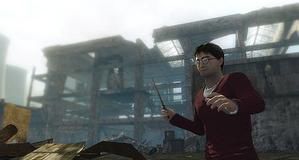