Nick Horth has a heart of iron, but a brain of damp cotton wool

It’s impressive just how much variation Paradox manages to squeeze out of the venerable Clausewitz engine, the backbone of its grand strategy library. You’ve got grimy in-fighting and incest simulator Crusader Kings, a more elegant and diplomatic take on world politics in Europa Universalis, and the colonial expansionism of the Victoria games. Hearts of Iron, meanwhile, has always been a series that focuses on the logistics and politics of modernised global conflict. Hearts of Iron 4 might be using a fancier version of the Clausewitz engine, with a bit of extra graphical sheen and a much more attractive UI, but at its core it retains the same approach; this is war as industry, where individual talent and bravery is battered into submission by the relentless march of mass production.

I was playing as Germany circa 1936, a nation well on the way to becoming the pre-eminent military power in Europe. At this point France, Russia and Britain are eyeing the thriving German industry and Hitler’s political dominance nervously, but shots are yet to be fired. It’s a starting point that allows you to take stock of your situation and consider your options – do you want to follow in the führer’s footsteps and invade Eastern Europe, or do you want to push West, through the formidable French defensive line? Whereas previous games in the series have largely followed the set course of history without much room for deviation, Paradox say it’s keen to invest Hearts of Iron with more of the historical sandbox options seen in Crusader Kings and EU. 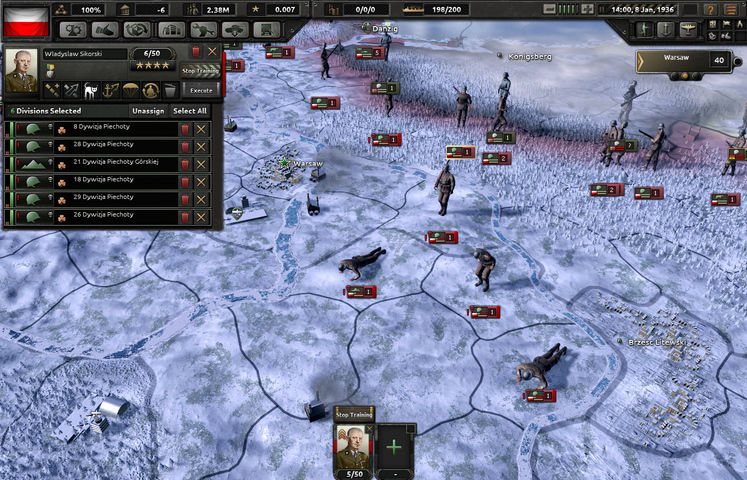 Give your troops a break from dying in the unforgiving winter. Send them off to do press-ups instead

There’s even a chance to get Hitler to stop being such a toxic little squirt and embrace German democracy. Unfortunately that was a slightly too ambitious goal for my hour-long preview session, but it’s great to see that those kinds of decisions can be made. Who knows how that might affect the flow of history. Could we see a unified France and Germany take on a military invasion from Soviet Russia? Or a fascist, militaristic USA launch a surprise attack on Britain? I should point out here that if you’re in it for the pure, historically accurate wargaming, this might be cause for concern – Hearts of Iron 4 clearly marks a turning point for the franchise. It’s unclear just yet how wildly we can veer from the set path, and obviously Hearts of Iron 4’s shorter time frame in comparison to something like EU is going to be a limiting factor, but the game certainly offers players a lot more freedom in how they approach things.

Short of time, however, I decided to not change the course of human history, but instead to keep things simple and invade Poland, without getting to grips with the new battle plan system or the subtleties of production first. While my annoyed and mostly frostbitten soldiers were surrounded and picked off by Polish troops, a developer gently and patiently explained to me what I should have been doing.

Unlike other strategy games, where you can pump out fresh units at your leisure as long as you have the funds available, Hearts of Iron takes a more in-depth approach to production. First off, you pick a particular design that you have fully researched – say a new Junkers 88 dive-bomber. Then, you’ll head to your factory screen, and assign particular industrial zones to start producing these new bombers. As war grinds on you’ll find yourself with difficult choices to make between pumping out high-tech, quality units and producing enough basic supplies to continue the fight. You might be able to produce four or five new Junker bombers a week, radically changing the balance of an air war, but you’ve also got to keep your infantry divisions stocked with weapons and gear. Keeping a firm handle on your industrial activities is key; shipping out advanced tech is no good if you’re not producing the essentials needed to keep a war going.

That sounds like it could be dry micro-management, but the developers have largely succeeded in making the process easy to follow and relatively intuitive. Once you’ve organised your unit production you can start creating and forming elite division templates to quickly rush out – German SS divisions, for example, are mechanised infantry forces with light artillery support. As your technology advances through research you can unlock new gear, vehicles and weapons for your army, and appoint various specialists to eke out further bonuses. There’s a lot of room here to pick a specific focus for your chosen country, and each nation has the usual bunch of statistical differences and national decisions to keep them feeling unique. 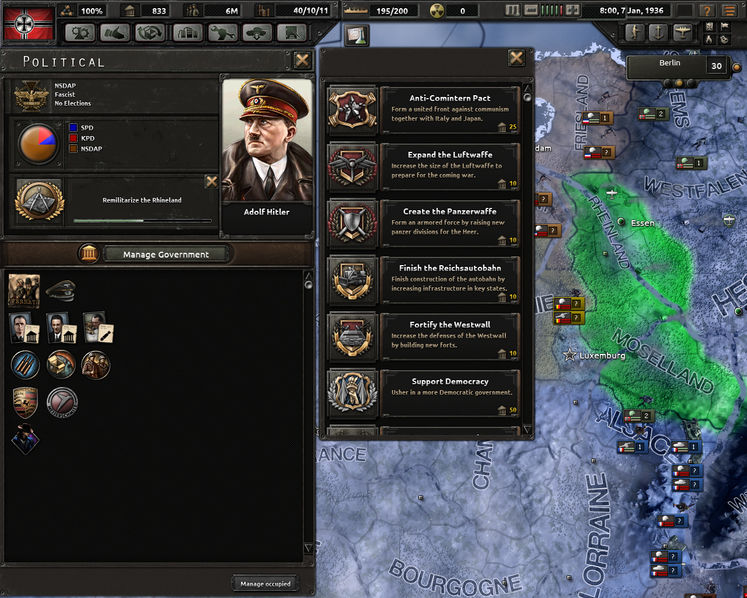 What would 1940s Europe have been like if Hitler had not been a warmongering, power-grabbing, evil little sod? Find out for yourself

Once you have your army prepared and ready, you can begin to push into enemy territory. Hearts of Iron 4 has a new command system that simplifies combat and leaves you free to concentrate on managing the infrastructure of your nation. You can assign several units to an AI commander, picked from a list of historical military leaders for each country, and assign them battle plans that will tell them where to attack and where to fall back to in case of defeat. You paint these lines on the map yourself using the command tools, creating arrows to indicate routes of attack and lines to indicate an area of engagement, It brings to mind the map graphics a historical documentary series might use to explain how a military campaign was carried out.

Though Hearts of Iron 4 isn’t really about leading your forces to victory directly, you can strip command from your generals if you need to break through an encircling move or issue very specific instructions. The focus here is more on top brass management, however. Picking the right man for the job – aggressive tank advances will suit armoured warfare experts like Rommel, for example – and making smart use of the terrain in your battle plan will give your troops and commanders a tactical advantage, while canny use of air dominance can give them the upper hand in a prolonged battle.

Bombing an enemy’s industrial or trade hubs will grind their production and income to a halt, allowing you to push forward and capture key locations and grind down a poorly armed and motivated opposition. I’d need more time to dig into the subtleties of the game’s combat, but it seems like a nice compromise between providing distinct strategic options and bogging you down with excessive micromanagement. There is the concern that too much automation will make the player feel like they’re sitting there watching an AI play the game. I didn’t feel like that in my hour-long session, and indeed I frequently had to take control of a section of the front to issue specific instructions, but I’ll certainly be interested to see how the system works over the course of a grand campaign. There’s a question mark here, certainly. 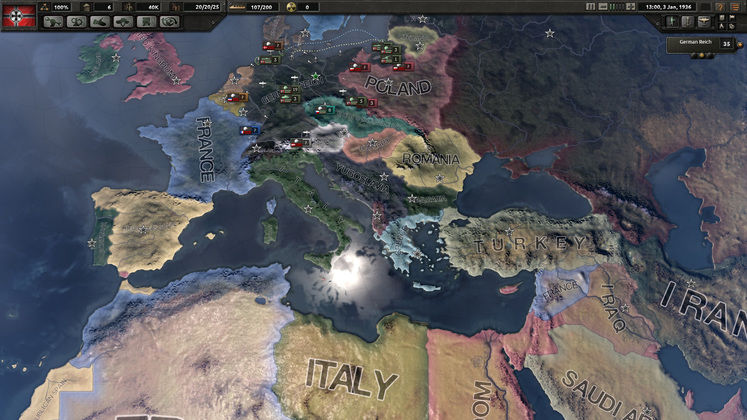 Heart of Iron 4 has a more washed-out, harsh colour palette than other Paradox grand strategy games, which really suits the grim, industrial tone

Hearts of Iron 4 certainly feels like an attempt by Paradox to make the series more accessible to newcomers, though it remains a very complex and pitiless beast. Presentation has been vastly improved, with open, readable and intuitive menus replacing the cluttered minefields of stats and figures that made the previous games so initially impenetrable. The map offers an attractively bleak strategic overview of the world at war, and carries some nice weather effects and a day/night cycle that gives a nice sense of progression as the endless war grinds on.

Will hardcore fans of the franchise be disappointed with the new focus on accessibility and historical sandbox gameplay? Perhaps, but it would be foolish to write Hearts of Iron 4 off so soon. The game may have received a new coat of paint, but that doesn’t mean it suddenly lacks depth. There are some smart ideas and interesting design choices bubbling away under the surface here. I’ve barely even begun to dig in to the nitty-gritty of production, and it seems like there’s lots of scope for armchair generals to organise and execute the perfect military offensive. Then there’s tech research, espionage, politics and diplomacy to consider. If Hearts of Iron 4 can effectively juggle all those different systems (and if the new battle plan system can avoid automating too much of the combat), then it could be the game that sets the franchise on equal footing with Paradox’s heavy hitters. It’s set for release in the second quarter of 2015.

Most anticipated moment: Creating my own alternative history in which Luxembourg conquers Western Europe and launches an invasion of the US mainland. I might not be able to do this, admittedly.