Gary Grigsby's War in the East 2

A bloody big game, about a big bloody war 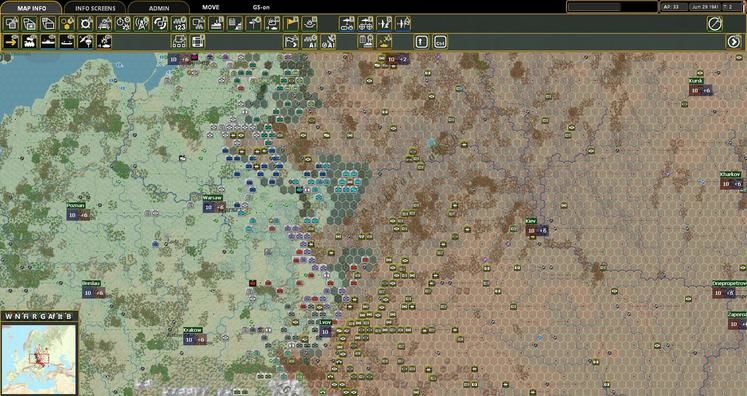 Reviewing Gary Grigsby’s War in the East 2 (WitE2) by developer 2by3 Games, is a difficult proposition. This is a game that comes with a 520-page manual and a 214-turn grand campaign. In short, WitE2 is a bloody big game, about a big bloody campaign. But before starting this review, I want to be upfront. I’ve spent just over a week playing WitE2 and I’ve not been able to explore all of its individual systems and game mechanics. Furthermore, I haven’t finished a full grand campaign. I do own and have played each of the previous titles in this venerable series: the original War in the East (WitE) and its sequel, War in the West (WitW). Caveats aside, what is this game all about, and is it worth playing?

WitE2 is a turn-based strategy game covering the eastern theatre of operations during the Second World War. From the Baltic to the Black Sea, Berlin to the Ural Mountains, the game covers a 3,000-mile front, with each hex representing approximately 10 miles and each turn simulating one week of real time. What sets WitE2 apart from its competitors, is its immense sense of scope and the sheer level of detail tracked within the game. 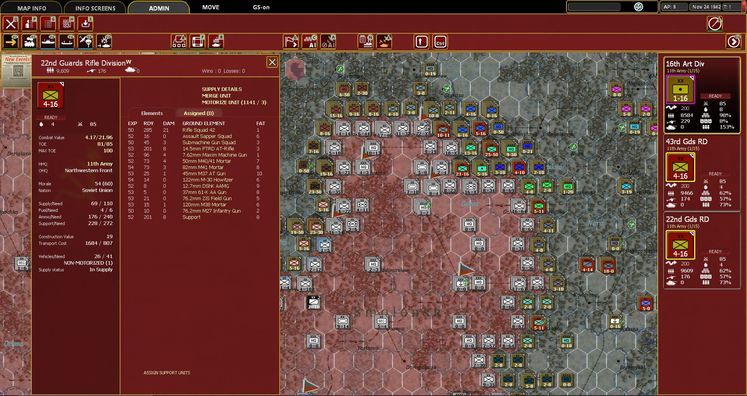 If a piece of equipment saw action on the Eastern Front during World War II, you will likely find it within the game’s database. Ammunition, fuel, unit fatigue, morale, experience, unit quality, weather, roads, rail, industry, production, all are modelled within the game. Losses are accounted for individually, meaning each tank, aircraft, gun, and soldier is tracked. Want to know which units engaged in a battle along a 30-mile front north east of Kharkov? It’s one click away. Feel like seeing which aircraft squadrons supported a specific battle, which artillery battalions committed a strike and the numbers of casualties? It’s all listed. Want to know the specific vehicle, tank or aircraft model that was destroyed or damaged in the previous turn? That’s all tracked too. And it’s this level of detail that makes the game both daunting and enthralling. The marketing pitch for WitE2 is not hyperbole. WitE2 is the most comprehensive, most realistic, and most advanced wargame modelling of the Eastern Front in any wargame.

Scenarios cover the entire war along the Russian Front from the opening of Operation Barbarossa, in 1941, to Götterdämmerung in 1945. There are seven smaller scenarios (each under twenty turns with a limited portion of the map), that cover specific campaigns such as operation Mars and Typhoon. The three grand campaigns start in 1941, 1942 (after Stalingrad, as the Soviet’s gain the initiative), and 1945 (the Soviet advance from the Vistula to Berlin). In all, there’s a reasonable selection of scenarios on offer and it gives players a chance to start small and build up to the grand campaign. 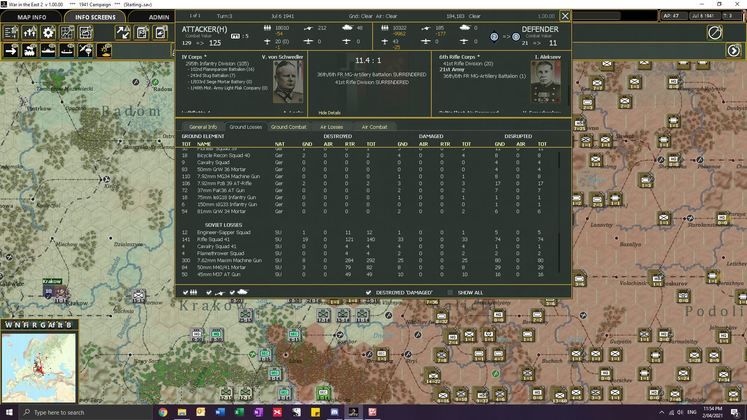 The Order of Battle is meticulously researched with each unit along the chain of command being represented. From OKH and Stavka, through army groups and all the way down to divisions and regiments. Battalions (representing specialised units such as engineers, rail-repair crews, anti-air units and artillery), are also represented. For the most part the player manoeuvres divisions around the map and into battle. Consequently, the game places an emphasis on the logistical and operational challenges faced by commanders along the Eastern Front—as opposed to detailed tactical operations.

Graphically, WitE2 is on theme. The unit menus are spartan, the map is clean, everything is easy to read and taken as a whole, it captures the atmosphere of what it is attempting to represent. Likewise, the UI is accessible with most information one or two clicks away. 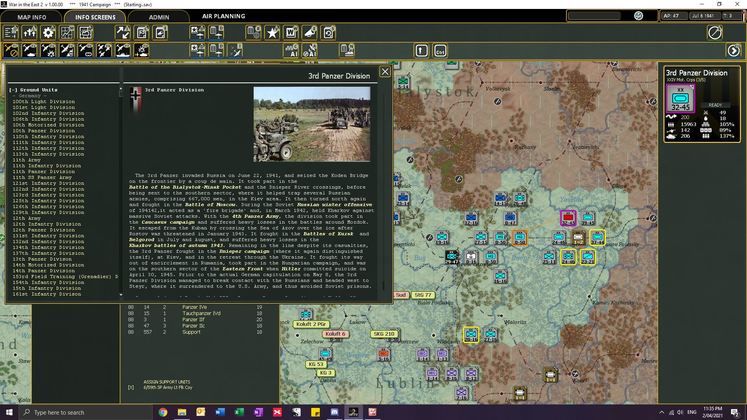 The game is stable, the AI is competent (as always, your mileage my vary), and the mechanics are well thought out and well implemented.

WitE2 does not reinvent the series. Instead, it refines what has come before. There are a significant number of changes to the game’s engine, the implementation of new game mechanics, new gameplay systems and rule refinements. The UI has also received some improvements. But if you have played any of the previous games in the series, WitE2 will still feel familiar. 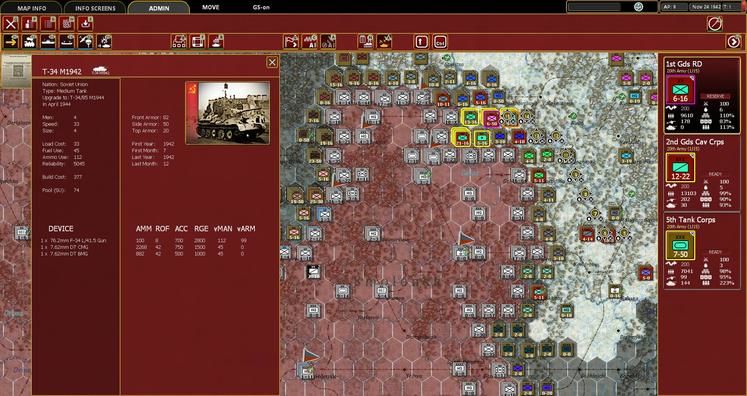 On the interface front, there are new map filters and overlays, a new turn summary screen, new unit art and an in-game encyclopaedia.

Ground combat has seen some new additions such as Combat Preparation Points. These points help simulate the build-up of supplies needed before a major offensive and punish units that engage in combat every turn without resting. Combat delay modifiers reduce the movement points of units passing through a hex that has seen heavy combat. There’s new mechanics for simulating the evacuation of Soviet factories. The off-map theatre of operations system has been expanded. This helps better simulate the German war efforts along the Western Front, North Africa, Norway and the suppression of partisan activity within Eastern Europe—this theatre of operation system can be managed by the AI. 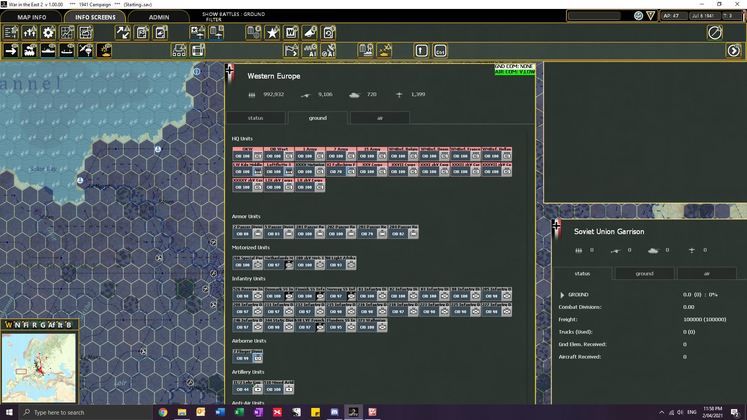 Road values have been added to each hex which are now combined with terrain types to give a more varied range of unit movement costs. Railways are now divided into dual and single-track lines impacting the movement costs and supply throughput for combat units.

However, the biggest addition to WitE2 is the new air-combat system, which has been lifted from WitW. Players can assign air-directives/missions to individual air-groups, weapon loadouts for aircraft and target priorities. At the other end of the spectrum, you can give the AI full control of the air-war and largely ignore it—assigning stances to your air groups which influence how and when they rebase, how they receive replacements/reinforcements and whether they fly missions during the day/night or both. As you become more experienced with the game, you can gradually take more control of the air war or let the AI do the heavy lifting, adjusting individual missions as needed. 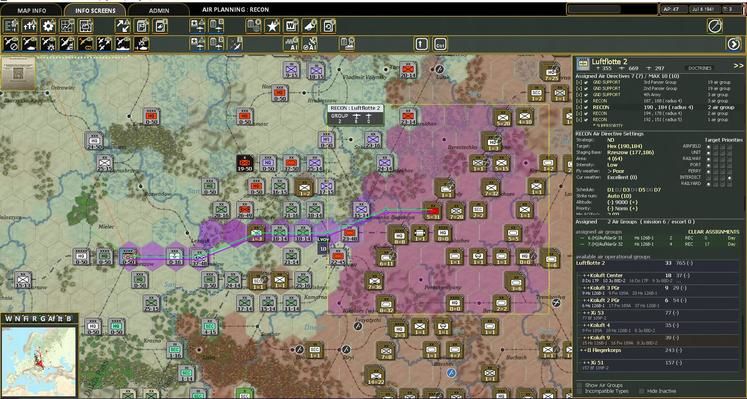 Boot Camp: Is it worth the time

So… is it worth investing time into learning how to play WitE2? That depends on you and to what extent you want to simulate warfare on the Eastern Front. Unlike more recent entries in the Hearts of Iron series (HoI), WitE2 attempts to simulate the Second World War, rather than provide a World War II themed sandbox. Consequently, the Axis player will be on the offensive from 1941 through 1943. The initiative will then switch to the Soviets, putting the German player on the defensive. Unlike HoI, you can’t mitigate this asymmetrical gameplay. You can’t just build more factories or recruit new units. You have to work with what you are given in WitE2. This makes the game more deterministic in its outcomes and that might frustrate players—as it takes away their agency.

Simulation aside, don’t let the steep learning curve and 520-page manual put you off. You can begin playing WitE2 without reading the manual cover to cover. In fact, the developers seem to be improving accessibility to the series with each new release. Some of the game’s key systems can be handed over to the AI, allowing the player to ease into the experience by focusing on the core combat gameplay. Starting with the smaller scenarios you can gradually build up towards the grand campaign—facilitating a learn as you play philosophy.

It goes without saying that WitE2 will appeal to a niche audience and I suspect you already know if that includes you. This series is geared towards people who want to simulate, as close as possible, the titanic struggle along the Eastern Front. You’re not going to like this game if the idea of setting reinforcement and supply priorities for units, seems over the top. With that said, the game is accessible. However, there’s no getting around the fact that you need to dedicate some serious time to unlock WitE2’s full potential and that’s going to turn some people off. But, if you’re willing to put in the effort, WitE2 is unparalleled in the strategic experience that it can offer. Put simply, it is a masterpiece of game design and execution.

Ordering your panzers to break through a front and encircle the enemy. 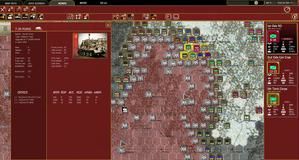