Battle Engine Aquila is a quasi-futuristic mission-based shooter that puts you at the controls of a giant spider thing that can also transform into a jet, but only for short periods of time

Ho, ho, ho. Merry Christmas. Now is the time of year for joy and good cheer. So if you're looking for any of that you'd better get the hell out of here because there's not going to be any of that in this review. Probably not in my next review either. I've got a pile of computer games on my desk right now and it's finally time to shrink that pile. First up in the chamber is Battle Engine Aquila. Aquila means Water Chestnut in Ukrainian. Ok, I just made that up, you believed it, didn't you? Come on you know you did.


Battle Engine Aquila is a quasi-futuristic mission-based shooter that puts you at the controls of a giant spider thing that can also transform into a jet, but only for short periods of time. The reason being, you have a limited amount of energy to fly and keep your shields working. That sounds like terrible design to me. Of course this limited energy refills when you're on the ground and not getting shot by 600 enemies, but hey, who's keeping track of how all this futuristic stuff works? Not me. I'm busy chugging scotch and trying to beat myself in a game of Thumb Wars. And before you go getting excited about some Mech Assault action let me just whack you in the proverbial knees right now with an equally proverbial crowbar. Battle Engine Aquila is to Mech Assault as Daikatana is to Half-Life. That probably doesn't make any sense to anybody, does it? Anyway, the story in Battle Engine Aquila starts you off as a futuristic forklift driver with the totally WWE inspired moniker: Hawk. The futuristic forklift may have been my favorite thing about the game but alas, it wasn't around long. To go along with his forklift Hawk also owns a horrible redneck accent. Now you know why I said quasi above. These people can't be that advanced if they still have forklifts and rednecks. Luckily, the Whoseyfoosey military has been developing a new combat vehicle that is amazingly similar to Hawk's sweet forklift. I know this may sound unbelievable with military might such as that, but the Whoseyfooseies are getting whipped up on by the Muskrats. Go figure. I guess armed forklifts aren't the deterrent they used to be. Some future. So... Hawk gets to pilot the Destroyer of Hope, errrr I mean, Aquila against the evil Muskrats. Oh and did I mention that the Aquila is not waterproof? Sure it's a massive, technologically advanced robot tank that fights on the ground and in the air. But if it gets wet it dies. I guess that makes it either a weaponized forklift/toaster/hairdryer or French. I could mock this setup all day long, but I won't. Let's move on. The incredibly exciting story of you (you're Hawk, no matter how much you wish you weren't) is continued via crappily rendered cut scenes that made me think my eyeballs were flaking. These assault your brain before and after missions but they're at least a little entertaining so don't skip them.

Graphically, Battle Engine Hope Destroyer has a pretty standard look to it. It's not terrible and it's not great but it could have definitely been better. At least the frame rates never slow down, and, overall, the game looks decent without really standing out. Functional. That's a good word for the graphics. Disappointingly, the only notable weapon effect is the supercharged version of your main cannon. It looks like a giant, electric spit ball which can white-out the entire screen when it lands, but even this isn't especially impressive. However it is moderately cool to watch one of the large enemy "aircraft carriers" get shot down, but coolness is one of the few things in life which really doesn't need to be taken in moderation. Coolness is like beer. You need a lot of it. And I do mean a lot.

In the area of sound the game is also rather plain, like a cracker. Not too tasty, but not untasty and it can make the difference when eating soup. Mmmmmm soup... Huh? What? Oh yeah. The voice work is probably the strongest audio area. The "actors" are solid without chewing up scenery like Jim Carrey and they manage to lend emotion to the cut scenes. I know I mocked Hawk's accent (hey I live in the south, he sounds like my friends and family) but the characters generally do a good job. The sound effects and music are sci-fi-ish in feeling but your enemies could definitely blow up better. Future explosions should be fantastic! Just like the movies taught me. The very length of this paragraph should let you know just how plain the sound is. There's really not much to say about it.


As for the rest of the game, you'll get 27 missions each with a cut scene highlighting Hawk's accent, awesome haircut, and the background for the upcoming mission. After the movie a few paragraphs of text will detail your goals. Goals can change on the fly (depending on how bad you're sucking up and letting your friends get killed) so be prepared to receive radio transmissions redirecting the application of your force or encouraging you to stop sucking so bad. Since the Whoseyfoosey military fights about as well as the French, most of the game's missions put you on the defensive. You get to do exciting things like guard transports or buildings that are under attack by an always more numerous foe. Each mission has multiple objectives, and completing primary objectives will be enough to move to the next mission, but completing any secondary objectives allows the game to branch you over to different missions. Unsurprisingly, the branched missions aren't very different, but later in the game they may include a plot twist or two. Still, branching missions good. Fire, as always, bad. As I mentioned, Aquila has two modes. In the spirit of revolutionary game play you can transform between them as you see fit. The walker mode is really just a big tank with legs. You stomp around like an oddly agile fat girl on the dance floor dodging incoming fire and waxing enemies. The jet mode surprisingly turns you into a Sopwith Camel. Just kidding, you actually turn into a jet. Saying that is an insult to the Sopwith and I would never do that. The Camel had better range and almost as much fire power as this thing. I've already said enough about the limited flight time and the reason behind it but this bears repeating: Don't touch the water! You'll melt and some girl with blinding red shoes will steal your partially burned broomstick. Also, you'll be majorly ticked off.

Now you may be wondering: What kind of awesome futuristic weapons can you defend your forklift with? Each form of the Aquila has its own weapon set, and you can gain access to alternate Aquila weapon load outs as you play the game. The weapons are pretty simple and include ammo-chewing machine guns, rockets, and a large, chargeable particle weapon that does a fair amount of damage but uses a lot of energy. I would have like to seen some fancier tools of destruction, but it's really not up to me now is it? Also, I'm not sure if it's a good thing or a bad thing but the game takes all the challenge out of aiming. The Vulcan Gatling gun locks on and leads your target perfectly every time. Just point, click and watch thy enemies be smote. Same thing applies for most of the projectile weapons too. It makes for a pretty boring game after awhile, but without it you'd be spraying rounds all over the damn place and never hitting a thing. Especially those people out there who are like me and have a glass eye.


Now we get to the most horrifyingly part of the game. Quite simply this game sins against nature by including a split-screen multiplayer mode. Were Moses around today he'd throw a few commandment stones at any games that included this "feature". Fittingly for this game it's the only way multiplayer mode can be played, and that's just awful. Split-screen multiplayer games make Baby Jesus cry. If you're sick and deluded with a low gaming standard maybe you can get past this. If you can, the game lets you select a battle engine configuration after which you may choose one of three types of two-player matches. Co-op: Which (DUH!) pits both players against a variety of insidious Muskrat forces; Skirmish: Where each player has a base defended by turrets and tanks and the object is to smite all foes; And finally, Head to Head mode: Where players go directly up against another battle engine. In case you thought you could just get away with playing multiplayer and avoiding all the joys I have spoken about, I must again whack you in the proverbial knee cap by informing you that the only way to get more maps is via the single-player game. Along with unlocking maps you're able to free concept art and other little things from bondage which adds a little spice. None of which make me want to strip naked and run through the streets with my hair on fire, singing the praises of Aquila. Though that does sound like fun.

Anyway, Battle Engine Aquila is a straight middle of the road game. Maybe that’s a bit harsh, seeing as how it’s not a poorly done game, but it’s just not fun. If you’re a big fan of the mission-based sim genre you might be able to get some fun out of it. Battle Engine Aquila does have a few nice touches like the branching mission paths (which can still turn out to be repetitive and boring at times) and the multiple fighting arenas (Though jet mode kinda sucks) which may interest you but it wasn’t enough for me. And the inclusion of split-screen multiplayer? I don’t want to say that sucks, but it sucks like the suckiest suck sucking suckity sucks. Rather than develop some sort of more accessible online or LAN multiplayer they just ported over the MP mode from the console version released earlier this year. That’s not acceptable in the PC world and it made me punch myself in the face repeatedly. Unmodified ports of games are rarely of the highest quality. So, the final word on Battle Engine Aquila is PASS. It’s not really worth your time unless you’re desperate for some new semi-Mech Assault action.

Engaging in a heated battle versus several Muspell fighters as you try your best to protect a friendly transport. 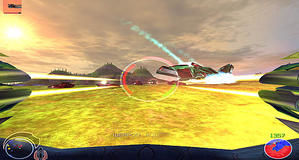