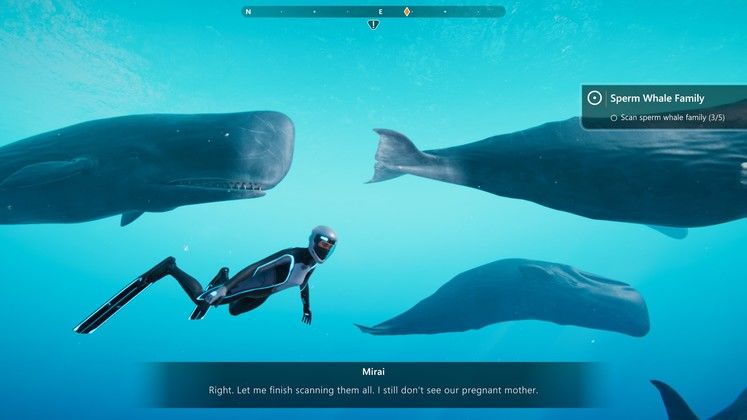 Our planet plays host to many a natural wonder that we often gloss over in our fast-paced lives. As a medium, video games often choose to favor other types of exciting topics over that of learning more about the ocean, which covers a great portion of our floating space rock. Enter Beyond Blue, a project that aims to marry narrative adventure games with documentary-style snippets, all in an effort to entertain while teaching us about the great blue expanse and its marvels.

In Beyond Blue, you play as Mirai, a scientist and diver whose fondness for the ocean and its wildlife stems from early childhood. Equipped with a special suit and a rebreather that lets her freely explore the ocean, the game frames her journey as a scientific expedition focused on testing cutting edge technology. This includes tracking, scanning and analyzing how sea life behaves and communicates while also live streaming her dives to a global audience. 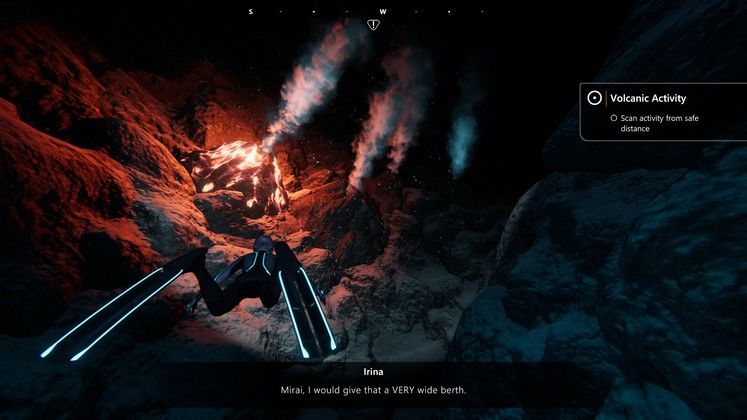 You’ll do lots of swimming and scan plenty of creatures in Beyond Blue, in between tagging new points of interest using underwater buoys. Your dives take you across several levels set at varying depths and different times of day which the game does a decent job of reflecting visually. The ocean’s different, beautiful shades of blue get replaced by darkness the deeper you go, to the point where they completely disappear. If closer to the surface the ocean almost feels welcoming, deeper down navigation relies on your attached source of light and eruptions from underwater volcanoes, creating an almost oppressive atmosphere.

Scanning creatures as they swim past you unlocks their respective entries in your science log, which reveals the total scannable number of each discovered creature. The more creatures of one type you scan, the more you learn about them, including the depths at which they live and certain interesting particularities about them and their behaviors. The futuristic Manta Drone you get early on in the story can blend in with the ocean’s inhabitants and scan important points along the bodies of sea life, revealing even more info. As you return to an area you’ve already visited, finding creatures you’ve already scanned in previous dives gives the game world – and your efforts – a welcome sense of permanence. 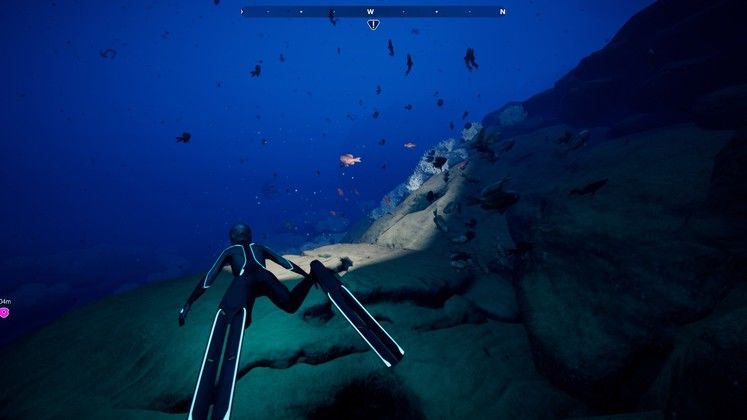 Most of the actions you perform – whether it’s observing sperm whales sleeping, dolphins rubbing across corals or picking up sensors for recharging – are contextualized by the back-and-forth banter between Mirai and her companions in the scientific expedition, Irina and André. Where Mirai’s enthusiasm lights up from the first moment you meet her – especially around the family of sperm whales that more or less hold together Beyond Blue’s frail narrative –, Irina is more pragmatic, looking to use potential research to found a biotech company. André is the protective member of the expedition, showcasing weariness towards the negative influence that humans tend to have on the ocean. Over the game’s seven-hour runtime, the three discuss, cooperate and argue without feeling fleshed out enough to escape the status of voices dispensing interesting information about the ocean, despite their expressive voice acting.

In between dives, you return to your compact submarine. On it, you can inspect different items – that make your small quarters feel lived in – and listen to music from a varied playlist that might just lead to discovering a handful of cool new tunes. You can also interact with a table that lets you inspect 3D models of discovered marine life and their various behaviors – like nursing or swimming at different speeds – and talk to Irina, André and Mirai’s sister, Ren. Beyond Blue tries to tug on the player’s heartstrings by bringing Mirai’s family and their problems into the mix but fails to create a sense of connection through its fleeting dialogue. Subsequent visits to the submarine also become dry detours from observing the ocean life out in the open. 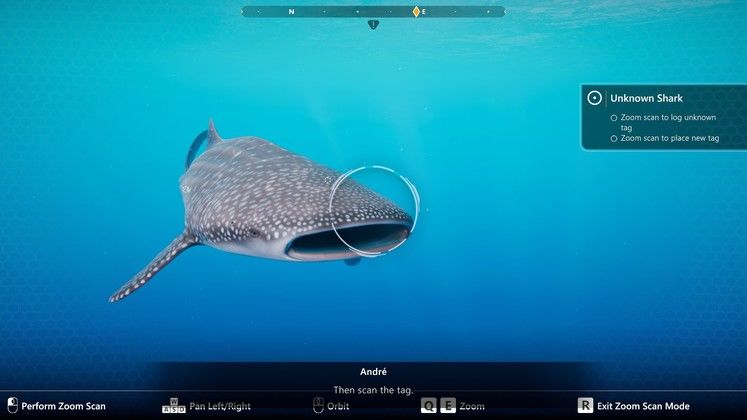 As much as the game’s worn-out mechanics fail to compel, it does succeed in creating a connection between Mirai and the sperm whale family that she frequently checks up on. Welcoming a new member, swimming alongside them, observing and listening to their fascinating songs that change based on what they’re doing – they’re all memorable experiences. To top things off, progressing through dives unlocks short videos in the menu’s Insight panel in which marine biologists like Dr. Sylvia Earle and other experts chime in on the ocean’s incredible beauty and diversity alongside the immensely intricate nature of whale songs. Completing all of the game’s eight dives also gives you access to free dive mode, which lets you go back to any of the levels and complete your scan collection or simply swim alongside the animals.

There’s, undoubtedly, a specific sort of tranquility to swimming alongside fish of all shapes and sizes. Sadly, Beyond Blue’s slices of ocean feel a little too artificial, especially when compared to the real-life videos in the Insight menu. The game, predominantly in its early stages, lacks visual richness and unscanned creatures conveniently appear around your objectives, always in limited numbers. While they do showcase different behaviors – some swimming together in schools, others preferring smaller families with the occasional sighting of lone small fish or turtles eating jellyfish – they feel purposefully put there by the invisible hand of a level designer, rather than organically appearing in their natural habitat, which ultimately harms immersion.

Although its open levels aren’t excessively large, they’re built in such a way that they create the impression of a seemingly infinite blue expanse – at least until you reach the invisible walls marking their borders. There’s a plethora of character models, some of which have interesting particularities, like the glowing comb jelly or the way in which a seven-arm octopus propels itself through the water. That being said, the videos in Beyond Blue’s Insight section overshadow its world, as its creatures’ animations can, occasionally, feel stiff and surprisingly inexpressive.

Beyond Blue struggles as a narrative adventure game but shines as an educational tool that brings awareness and reveals some of the ocean’s secrets. Its few characters don’t quite stand out and the simple core gameplay loop of swimming, scanning and following waypoints comes off as rather bland. While there’s not much excitement in the actions that you perform, the way they’re contextualized pulls the experience up significantly. Different moments during exploration and the short documentary-style videos featuring real-life experts ensure that by the time you’re done with it, you’ll have learned at least a handful of new and fascinating things about the ocean and its inhabitants.

Swimming up to sleeping sperm whales and getting a sense that time, for a moment, had stopped. 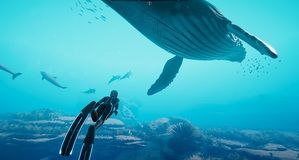