Find out what's new in the latest instalment to the Cities XL franchise. Is it worthy of your time and money?

I loved Sim City 2000. I almost dread to think how many hours of my life have been sunk into that game over the years, and so that makes it all the more tragic to me that the city simulation and management genre has died so thoroughly over the past few years – left out in the cold with Maxis now almost entirely focused on The Sims, the genre appeared to be in dire straits.

In 2009 Monte Cristo announced the ambitious Cities XL, an attempt to mash together the city simulation with the one genre that has continued to thrive particularly well on PC – the MMO. A company behind smaller titles like Airline Tycoon and City Life, Monte Cristo poured tons of time and effort into the game – but it didn’t all quite go to plan.


Fast forward a few years from Cities XL’s 2009 release and the plans for the game have changed significantly. The MMO elements have been pulled back, the subscription fees gone – and this is the third entry in the Cities XL series, which has been edited, tweaked, nipped and tucked to make it a more wholesome single-player experience, pedalling it back hard from its initial massively multiplayer roots.

Cities XL proved to be too much for Monte Cristo, and a scant seven months after the launch of the title the company disappeared altogether. Since picked up by others, the core skeleton of Cities XL still lives on – and is now on its third full release.

I talk so heavily about Cities XL’s history because it’s vital to understand where the series has come from in order to understand if this new 2012 edition of the title is any good – or, more importantly if it’s worth your hard-earned money.

The heart of Cities XL in this year’s release is the same as it was even when it had its MMO credentials intact. It drops you into an awesome city sandbox with a simple task – build a working, breathing, successful city.

Cities XL 2012 does a lot and improves a lot of systems that have desperately needed changes to their implantation since the original game. The stand-out for me is the tax system and general economy system – always a stumbling block for me in games of this style. Even in Sim City, economic stability was always my toughest problem.

With the 2012 edition of Cities XL what was a difficult-to-use system is streamlined and bettered, making it easier to stay in profit and avoid a nasty deficit that’ll spell the end of your time as the boss of a city – and that’s not alone in its improvements.

The UI itself has been overhauled in a lot of ways, making it easier to lay your city out in a way that is both visually appealing and successful in-game – understanding where and how to zone – as long as you’ve got a grip of the in-game mechanics – is easy, and the traffic system is greatly improved, making it easier and more satisfying to set up decent public transport systems that actually work.


That’s the nice thing about Cities XL – in many ways the nucleus of the experience – it can be a complex game. If you don’t plan out ahead in some shape or form you’ll find yourself in debt, having to bulldoze areas you’ve incorrectly placed, destroying homes and offices and in turn angering a bunch of existing citizens – only to spend more money to set your mistakes right.

That can be frustrating but when things go well it’s also incredibly rewarding when things go well and you see a huge city thriving, ant-like citizens scarpering about on their business. It feels like a living, breathing city, and I feel like I’m playing a prettier version of Sim City 2000 – it’s a dream.

And then Cities XL 2012 jerks me awake. It does it with contrived gameplay mechanics such as how certain technology is locked out – not by a time-line or invention but by an arbitrary, gamey measurement of if you’re ‘ready’ to handle more advanced techniques as a player.

It’s in this progression that the MMO elements are missed. Without other players to trade with, sometimes the game expects you to create multiple cities in order to trade between the cities you own to make sure you’ve got enough resources for continued growth. The problem is, I don’t want that – I just want to build one awesome super-city. If I was trading with others online I’d be happy, but those features are gone, along with the game’s original developer.

It’s astonishing how things like ease of use and the user interface in Cities XL have improved immeasurably over the original 2009 release but other elements of the game have remained so fundamentally broken. It doesn’t help that despite not being all that impressive graphically (though in fairness it was in 2009) but still runs sluggishly even on my comparatively powerful rig.

The thing about Cities XL 2012 is that it really isn’t all that different to the previous release – so I’ll defer in much of this to Joe’s Review of that release right here on Strategy Informer. 2012 reminds me in many ways almost of the update you’d find for a sports title – incremental tweaks, improvements and additions in theory make the game better, but there’s a problem there, too.

“Cities XL 2011 can be summed up in a paragraph,” Joe wrote last year, “apart from the specific exceptions that I've already laid out, if you want to know about Cities XL 2011, go read my review on Cities XL. They're pretty much the same game.”


If this is pretty much the same as 2011 and the 2011 edition is also remarkably similar to the original Cities XL, what’s new and why would this be worth the money of anyone who played either of the previous additions?

My answer for those who played the previous games is no - unless you’re absolutely hurting for a city simulation and management title. If you’ve never played either of the two previous Cities XL titles this is a much better value proposition and more worth your time – as long as you understand this is a solid – but flawed – title.

My answer for those who played the previous games is no - unless you’re absolutely hurting for a city simulation and management title. If you’ve never played either of the two previous Cities XL titles this is a much better value proposition and more worth your time – as long as you understand this is a solid – but flawed – title. 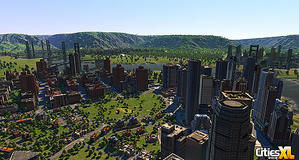