Stop, infiltrate, and listen. 47’s back with a great new invention

Hitman is the game fans have wanted since Blood Money. It’s not the action-packed appeal to the mass market that Absolution was. It’s a slow-paced game of observation, where you watch the gears turn in a clockwork level, figure out your opportunities for infiltration, and carefully execute both your plan and your target. In short, it’s a Hitman game. If you’re not familiar with the series, that means that you’re cast as Agent 47, a genetically-engineered super assassin, whose only job is quickly and quietly killing assigned targets. You can wield all variety of guns, from pistols to assault rifles, but just a few enemy shots will kill you straight away, meaning that discretion is essential.

Stop, infiltrate, and listen. 47’s back with a great new invention.

It’s a stealth game, but not in the sense of a Metal Gear or a Splinter Cell where you’re infiltrating secret facilities filled with armed guards who’ll try to kill any intruder. Your targets are at yacht parties, fashion shows, and other highly public locations. Infiltrating most often means simply walking into a location and observing who’s allowed into which locations, figuring out when and where your target will be alone, and progressing through a series of disguises to get there at the appropriate time.

The tutorial mission offers a good example of the game’s flow. Your target is the host of a party onboard a yacht. You find a worker on the docks, knock him out, take his clothes, and hide him in a bathroom. You can then enter through the maintenance area. After that, you head into the galley, knock out the chef, take his clothes, hide him in a freezer, and tend a bar while watching your target meet an associate. You follow the two of them to a private meeting area, and when the associate’s back is turned, a quick silenced pistol shot completes your mission, leaving you to simply find a discreet exit point. 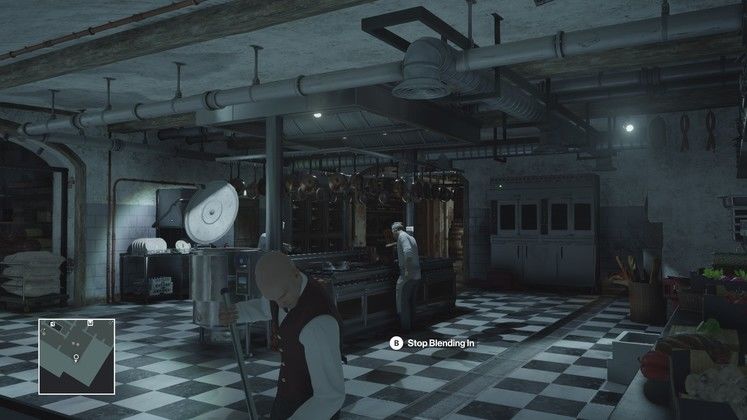 That’s the initial directed approach, but it’s hardly the only one. You could pick off a security guard and walk onto the boat heavily armed without raising suspicion. You could find some rat poison, drop it in the target’s drink, and finish the job while he’s vomiting in the bathroom. You could disguise yourself as the associate, talk to the target, follow him to the solitary meeting spot, and take him out in the most efficient way possible. Or you could just use some explosives.

Those are just a small handful of approaches available in the training mission, which is absolutely tiny compared to the real locations later on. The first “real” mission takes place in Parisian manor converted to host a fashion show, and I spent nearly an hour closely tracking my targets and looking for the best opportunity to strike. That hour went by and the mission was successful, but I can list a bunch of locations I never visited and a bunch of opportunities of opportunities I heard about but didn’t pursue. I finished the level the first time feeling that I’d seen maybe a third of what was available.

Because of the clockwork nature of the way NPC schedules interact and certain unique assassination options present themselves, they sometimes break if you don’t closely follow the script. This game does a much better job of alleviating that issue by offering a list of challenges that suggest certain ways to tackle your mission and certain unique events that are possible within the level. This doesn’t just turn the game into a list of objectives to follow, though, as the hints are vague enough to force you to explore, and each one in turn spokes off into three or four different ways to proceed. Overhearing certain pieces of dialog will occasionally set you onto more prescribed paths with quest markers and obvious objectives, but these rarely take you as far as the execution itself, and generally serve as a suggestion to get you to a particular room or into a meeting with a particular person. 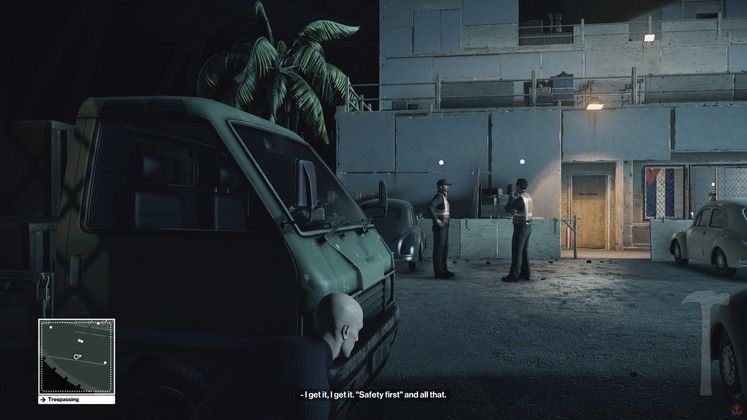 These challenges also do a great job of encouraging you to replay levels and employ different tactics. I really enjoyed revisiting locations and seeing all the different ways the mission could play out, and having a direct checklist of possible options means that replaying levels isn’t just a matter of finding the most efficient path to success, but finding every possible permutation of the level’s unique mechanics. As you complete these challenges, you’ll increase your mastery level over that particular location, which will allow you to choose new mission start points and new starting equipment. You’ll also be able to create your own challenges by going into a level, choosing a target, and setting specific conditions on how to kill them, which other players will then be able to try. Official challenges in similar veins will also be added periodically.

I’m talking a lot about replayability here because, for better or worse, that’s Hitman’s entire focus. The episodic release schedule and the mechanics surrounding the challenges makes it very obvious that Square’s counting on players to want to revisit these levels over and over. The series’ strength has always been in its magnificent clockwork locations and in the variety of ways you can tackle any given problem, but the consequence of such huge, complex levels is that there aren’t very many of them. 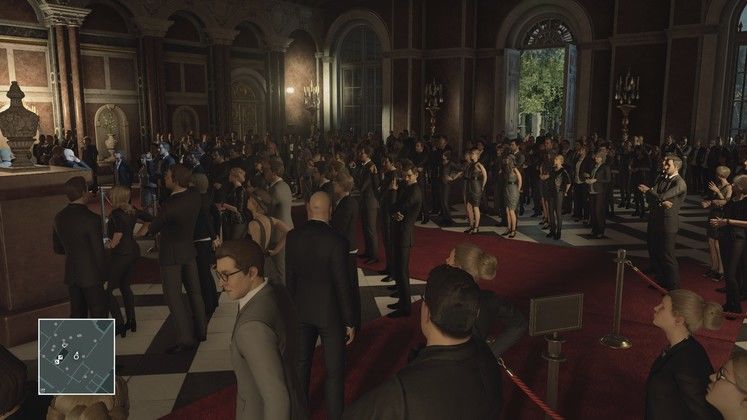 This review specifically covers the $15 Intro Pack, as the remainder of the game will be released episodically over the course of the year, and this initial offering covers a small tutorial level, a slightly larger training mission, and the giant level set in Paris. The remainder of the game, which will cost a total of $60, consists of five more levels that should be similar in scope and scale to the Paris location. While I can’t speak to the quality of those later levels, it’s worth noting that the final game will essentially consist of a brief prologue and six “real” missions.

This means that if you’re only interested in playing straight through a story campaign and not exploring the alternate paths in each mission, then Hitman is not the game for you. There’s actually a lot of interesting, fun content wrapped up in seeking out all the different ways you can interact with a level, but if you’re not interested in that then it’s going to be a brief, unsatisfying experience. 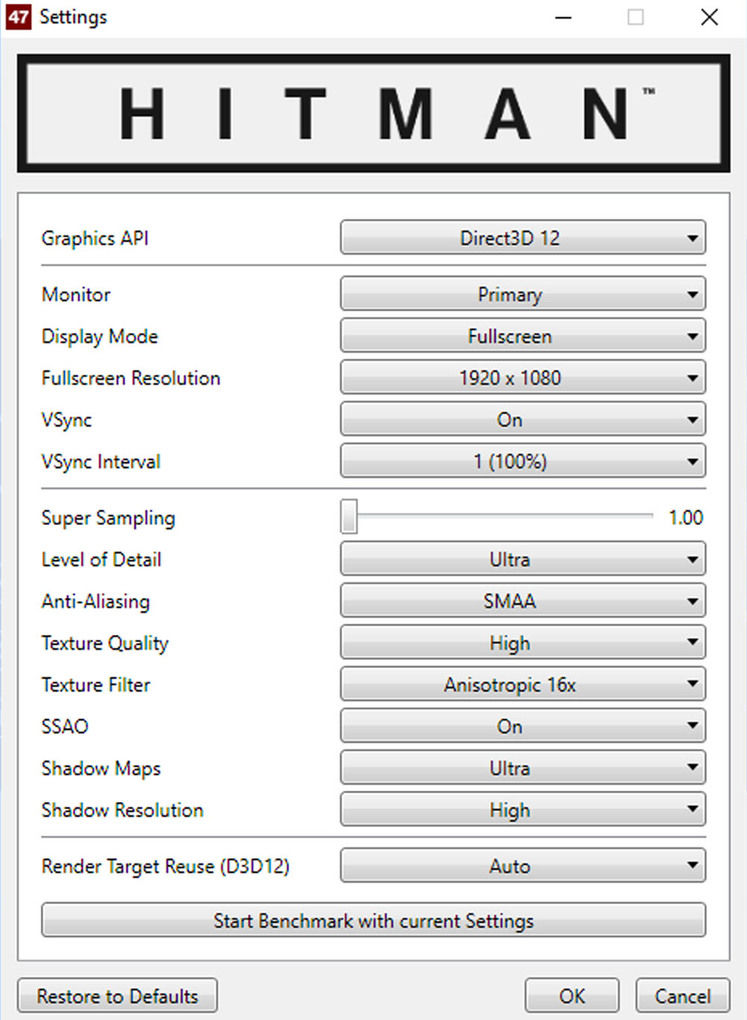 We tested the PC version on a couple of different machines, and performance was solid, if not spectacular. A high-end rig running a 980TI ran at a solid 60FPS on high settings, though turning on a few ultra options brought it down to 30. A midrange machine with a 960, similar to their recommended specs, was capable of a less-than-solid but still completely playable 60 on medium.

Hitman’s episodic release plans and amount of content are going to be a source of controversy. It’s got all the fundamentals of a terrific Hitman game, and if the future levels live up to the scale of what’s in this intro pack, then they’ll be massive, densely detailed locations filled with possibilities that will take dozens of playthroughs to fully explore. Completing all the challenges and permutations of this offering alone will easily last you five to ten hours. But taking the time to explore the same locations over and over, even if there are vastly different things to do every time, simply isn’t going to appeal to a lot of players. If the prospect of slowly picking apart the mechanics of giant stealth sandboxes is exciting for you, then Hitman should provide a wonderful experience. But if you’re a one-and-done type of player, then you should look elsewhere.

Knocking out a supermodel and taking his place on the runway. Maybe 47’s true calling was the fashion industry all along.