It could be worse

Homefront: The Revolution is a reboot of a franchise with only one game. Nothing is the same except the KPA are the enemy and it’s a story about an occupied America. You play as Ethan Brady, the up-and-coming wingman of Benjamin Walker, the resistance leader and apparently the only man who has the words to unite and ignite the people to fight back against the KPA. Walker is eventually captured so you and other members of the revolution attempt to get him back. That’s not a unique plotline compared to how the KPA took over America, though that’s not an original idea either, but it sure is interesting. It’s a story that doesn’t have many twists or turns but the gameplay melts into it pretty well, so it’s engaging until the end.

Fight against the KPA and try to take back America in this franchise reboot.

It’s clear this game is Dambuster Studios’ attempt to keep the franchise’s heart pumping after it nearly flatlined thanks to publisher mishandlings and other financial blah-blah-blah’s. And congratulations are in order. Homefront: The Revolution obviously needs extra polish but there’s genuinely good ideas and excellent execution to gameplay flow.

First, let’s talk about what works. Homefront: The Revolution is considered an open-world game and many comparisons around the internet have been made to Far Cry. The similarities are there but Homefront does a better job of diversifying missions that would be mundane in other games such as Far Cry. Yes, everything is boiled down to killing this person, blowing up this structure, or some other violent act, but the context and the manner in which you go about these objectives hardly ever feels the same.

In fact, I’ll tell you what missions are repetitive. They’re called Hearts and Minds. This is the time you attempt to rally people to your cause by destroying megaphones, assassinating important enemies, rescuing people from the hands of the KPA, etc. Sounds like Far Cry, right? These missions appear three times throughout the game. But Dambuster was smart to spread these specific missions far apart from each other so even though they are a chore, you haven’t been suffering through it for hours. 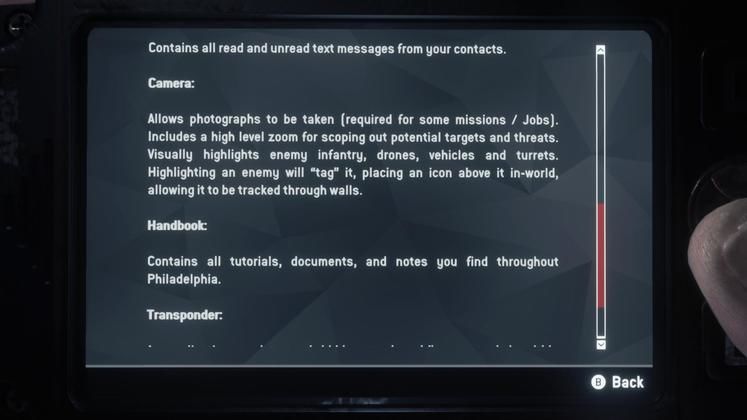 Journal entries are scattered throughout Philly for more story context.

This also brings up an interesting aspect about the open-world description. It’s not as open as you think. It’s more like Borderlands. Homefront: The Revolution takes place in Philadelphia and certain areas are broken up into one of three zones: Red Zones, Yellow Zones, or Green Zones. Each zone is separated by a loading screen and whenever you enter a zone, the objectives are limited to that zone. Meanwhile, there’s hardly any side missions. Flashpoints - impromptu side-missions - occasionally pop up but unless you grab a side-mission from the Revolution bulletin board or liberate a section of the map Ubisoft-style, there’s not much activity. So when it comes to being a true open-world game, it doesn’t feel that way. Each area feels like a level you have to complete. It’s open in the sense you can move wherever you want but there aren’t a lot of distractions and the areas aren’t truly connected.

Despite that it’s not entirely an open-world game, I think it helps focus what you’re doing. Far Cry has icons littered all over the map. It’s distracting. Homefront: The Revolution has a few; most found during Hearts and Minds missions. Distractions are limited allowing you to focus on the story and the task at hand. That sounds bad thing but when your primary missions aren’t very interesting, you need something to fill the void. Homefront: The Revolution doesn’t deal with that problem.

Another unique feature I think works for those with varying play styles is the ability to swap gun types on the fly. I’m not talking about switching weapons, I’m talking about deconstructing a gun and turning it into another gun. After you buy a gun, you can also buy builds for guns of a similar type and swap between them. For example, you can turn your pistol into an SMG. I never used it because it didn’t fit my style of play and I was happy with the gun I was using but I can imagine people coming up with interesting tactics to easily take down enemies. 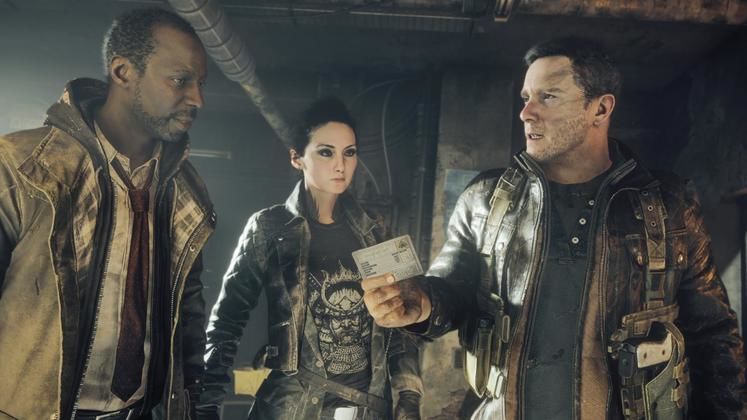 You also have four different grenades with different effects. You have Molotovs, explosive grenades, distraction grenades, and hacking grenades. The latter is the weirdest. It’s actually called a “hacking tool” and it needlessly attracts as much attention from the KPA because this “tool” is actually a grenade. These can be upgraded for different uses as well like strapping them on to an RC car. Essentially the equipment, minus the hacking tool, isn’t necessary. I found the distraction grenade the least useful. It costs money to increase its viability and I found better things to spend my money on.

Homefront: The Revolution has great positives but unfortunately, some of those positives are blanketed by the lack of polish and odd game design decisions. Glitches are everywhere and it’s hard to tell if some abnormalities are glitches. One of the worst is enemies appearing from nowhere. I was in a pressure situation with low health and an enemy appeared out of thin air charging at me! And there’s been several times when there’s not a body in sight and once I turn my back, I’m getting shot at by a body a few feet from me. It’s extremely frustrating.

Another egregious glitch almost kept me finishing a level. I had to break a window to reach a ledge that was otherwise unreachable. Later when I rebooted the game, I couldn’t climb through the window. Somehow, the game glitched in another way and I could jump to the ledge (and thankfully that did happen) but you know it’s a problem when glitches are forcing you to exploit other glitches to finish a level. 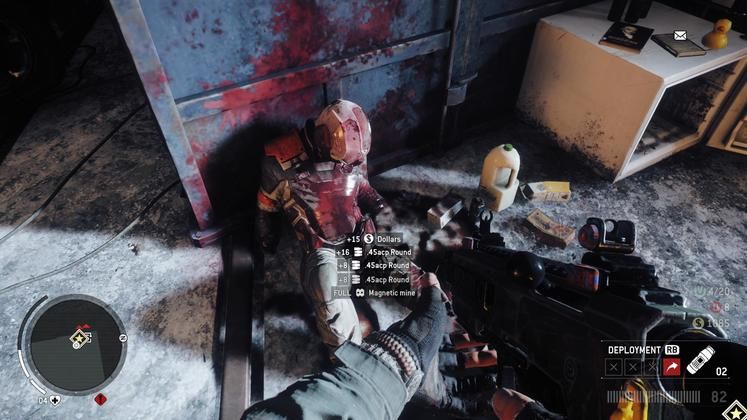 Go ahead. Loot the dead.

I’ve also had problems shooting through gates. Sometimes it works, sometimes it doesn’t. I’ve executed an enemy and his body remained standing. Civilians disappear instantly. There are a lot of problems.

This isn’t a run-and-gun game, either. So you have to find cover and generally that works but there are points in the game where you’re constantly triggering alarms forcing yourself to hide after you complete little steps toward an objective. That part of the gameplay design is exhausting and I think contributed to the extra two hours on the 20.

And for a game “achieved in CryEngine,” it’s ugly. Like, distractingly ugly. It makes me cringe listening to the good voice acting coupled with terrible animations. There are a lot of details in the world but textures don’t particularly look fantastic. Shadows also have blurry edges no matter what setting you’re on. 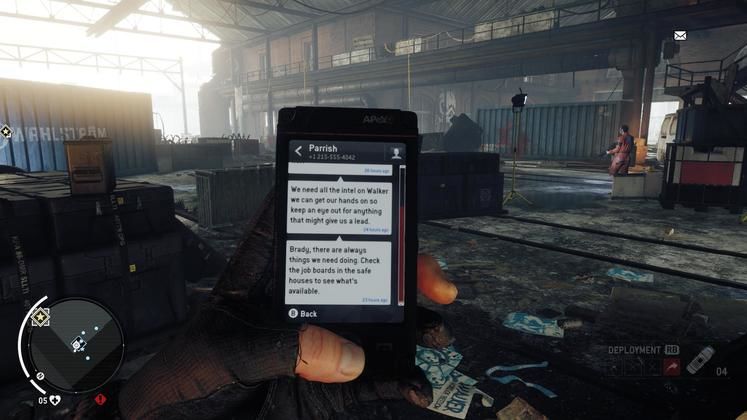 Text messaging glitched a lot. I kept receiving the same ones.

Multiplayer was unavailable before the launch date. However, Homefront: The Revolution goes for cooperative mission scenarios instead of competitive multiplayer. I tried them solo just to get a feel for them and they seem to be extensive but they are very challenging. But how is the online framework and missions played with others? Expect an update this week. 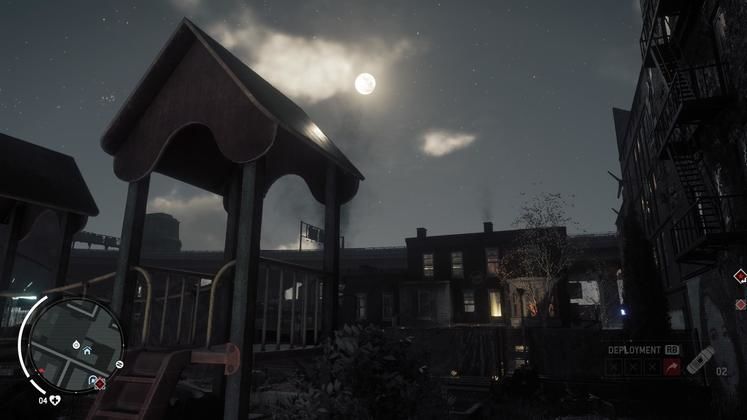 There's a day/night cycle. My best work happened at night. 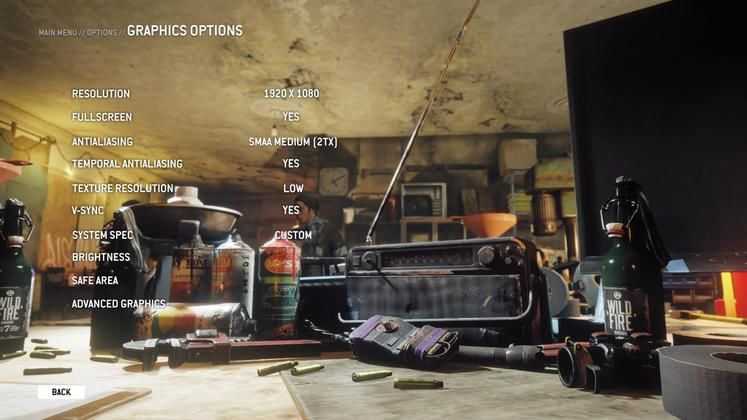 The minimum specifications are:

The recommended specifications are: 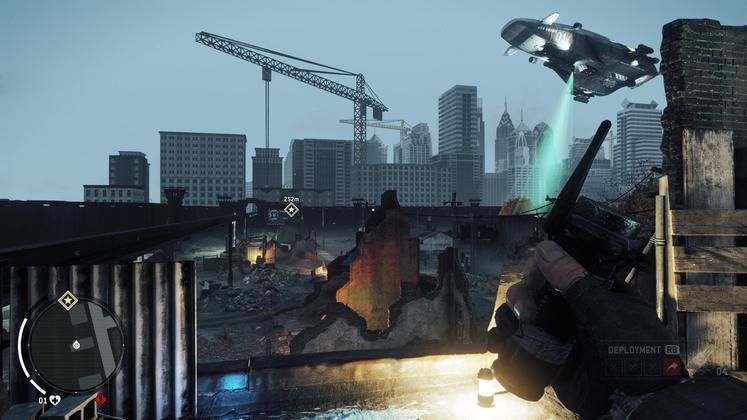 Stay far away from the airships. Far away.

With a mid-range machine that meets the minimum requirements, I could not get the game to run consistently above 30 FPS even on the lowest settings. Most times the framerate stayed around 28 FPS. After loading in an area, a major explosion, or some other random time, the game would hitch sometimes affecting my aim. Perhaps with a higher end machine the game would run smoother so I’m not going to say expect problems no matter what machine you have but if you have a PC that meets minimum requirements or lower, expect issues.

Despite the shoddy graphics and performance, and a story that could use polish in its execution, Homefront: The Revolution has a solid foundation. It’s challenging and the mission variety in a pseudo open-world game is the best I’ve played in a while. It kept me engaged for its 22 hours. At the end, I felt satisfied. I hope to see another one with a bigger budget behind it.

Landing headshots and hearing the bassy tone that accompanies it.