Is Deck 13's Jack Keane a worthy captain, or should he be swabbing the poop-deck with the rest of the plebs?

All aboard the good ship Nostalgia! Developer Deck 13 knows a thing or two about PC adventure gaming and  its new title, Jack Keane,  affectionately loots from some classics in the PC canon. The box art alone will trigger deserved comparisons to much-loved staples such as the Monkey Island series, and the gameplay follows the rules set out by LucasArts all those years ago. But is Deck 13's Jack Keane a worthy captain, or should he be swabbing the poop-deck with the rest of the plebs?

The game is set at the height of the British Empire in the early 20th century, and terminally under-achieving captain, Jack Keane, is in a bit of a pickle. We find him tied to a chair at the hands of two typically dim-witted thugs, intent on recovering the money Jack owes their boss. A crafty escape is necessary and Jack is keen to flee London before they catch up with him again. However, a lucrative offer awaits him from the Queen's Royal Secret Service. He is tasked with sailing to the mysterious Tooth Island, somewhere in the Indian Ocean, where he must gather information on the evil Doctor T.


The Doctor, it seems, has been carrying out some unusual experiments on plants. The results threaten Britain's monopoly on the tea trade, much to the annoyance of the Queen. Therefore Jack is chosen to get to the root of the issue, on the basis that he is much too incompetent to arouse any kind of suspicion. Jack accepts and, with the reward firmly in mind, sets sail for Cape Town where he must collect a bumbling British spy before heading for Tooth Island. There he will uncover a secret offering clues to his own mysterious past.

Like the adventure games which inspired it, Jack Keane uses the point and click interface. The left mouse button moves Jack and observes items, whilst the right button interacts. The meat of the game lies in collecting items and overcoming the many, many obstacles that prevent Jack from completing his mission. Yet, this is also where the game's biggest problem lies. The vast majority of puzzles involve combining items and environmental hot-spots in order to advance. This often requires the player to wander to one end of the level to get to item A, go all the way back to put it in hole B, only to discover that door C has opened where item A was. It's frustrating and feels like the game's small levels are being padded out unnecessarily.


Mercifully however, there is no pixel-scanning (checking every corner of the level for interactable objects) as Deck 13 have ensured that pressing the 'x' key at anytime will highlight all the usable items and hot-spots on screen. The game makes a number of concessions to the player - cut-scenes will often focus on important items or places, and sparkling light effects will also highlight areas of interest. It's a prime example of the developers addressing the flaws of the games that inspired them. And yet, whilst advances have been made in some areas, the gameplay still feels very dated. It is entirely linear, with no branching decisions or storylines. Each puzzle can (and often will) eventually be solved by exhausting all of Jack's items and lines of dialogue. The game does offer the occasional change, when the player takes control of Jack's volatile love interest, Amanda, and the section involving young Jack, but the gameplay remains the same.

For a game to overcome such a basic gaming mechanic, its storyline must dazzle. Jack Keane is clearly inspired by classic SCUMM adventure games like Monkey Island and Indiana Jones and the Fate of Atlantis, and also contains many references to past games and films. Jack himself seems to be equal parts GuyBrush Threepwood, Indy and Han Solo. But the story is less gripping than it could be, and the occasional gaping chasm in the plot does nothing to help. However, the way that the developers pit Jack and Amanda against each other is intelligent, as are the revelations later in the game about Jack's past.


The game relies on humour to keep the player interested and it often works. The developers have instilled Jack Keane with some genuinely funny moments (such as the British captain who has lost all his money and possessions to the Victorian equivalent of the African email scam). But for each one that hits, there'll be another that misses the mark. There are a few occasions where the game seems a little smug, offering a knowing wink to the camera, such as when British captain announces that “all computer games do is make people aggressive, anyway”.

For all its comical charm, Jack Keane does not quite reach the heights of the games that inspired it.  The storyline does not offer enough to engage the player for the duration, and so the dated gameplay becomes more noticeable than it should be. Whilst some of the annoyances of classic point and click games have been ironed out, others remain and do not stand up well to modern alternatives.  The point and click adventure game is by no means dead (see Sam and Max) but, on the evidence of Jack Keane, nor is it due a major revival.  It feels a little like watching a tribute band: enjoyably nostalgic, but lacking the same magic as the real deal.

Chasing a hot air balloon in an ouzo-powered bi-plane 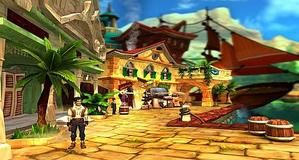