Are two wheels better than four?

Motorbikes are dangerous. This is a fact that was hammered into my brain from a young age, after a serious accident left my uncle with a broken leg requiring major surgery. Later complications precipitated the need for a hip replacement, despite his relative youth. This means that for me, motorbikes have never really been an option - I was told as a child that I am never to even consider buying one. Combining my own personal cowardice with a desire to not completely freak out my parents, I have basically accepted that I'll probably never own a motorbike. In truth, it's not even something that I've really ever thought about... until now.

OK, so reviewing a game about digital motorbike racing is hardly large scale rebellion, but the above story hopefully reinforces two points. Firstly, I am not a motorbike expert. I've ridden one of those ones they drive in the south of France that go about 12 miles an hour and I once went on the back of my uncles Triumph down the back lane. That is the full extent of my real life motorbicycling. Secondly, the reason motorbikes are so dangerous - if MotoGP 14 is to be believed – is because driving them is really bloody hard.


MotoGP's selling point and its main distinguishing feature as a game is its driving model, that straddles the line between arcade-y racer and full-blown simulation. MotoGP isn't about skidding around corners or drifting or any of that car/Nolan's Batman on a bike stuff. It's about holding a tight as hell racing line, braking hard and careful acceleration around corners. Except with a motorbike there are a few other things to consider than the simple stop and go of racing with four wheels.

This all sounds a bit painful, but actually what this does is add a tonne of depth to the racing. You've got a whole lot more to worry about than just cornering and the knowledge that any mistake will basically see you instantly shunted into last place adds a great deal of tension to proceedings. Fortunately, if you're not especially fond of the taste of gravel, the game helps you out in a few different ways. As with almost any racing game made since Codemasters' Race Driver GRID – there's a generous time-rewind option that allows you 5 chances throughout a race to correct your mistakes (as well as relive the awesome sight of a crash, backwards and in slow-motion). In addition to that there is also a whole suite of driver assists, such as simplified bike physics, automatic traction control and tuck.


What this means is that MotoGP starts out feeling like an impenetrable sim, that only some kind of long-term expert motorbikist should even contemplate playing. Switch on a few of the assists and suddenly what you have is a tight arcade racer with a ton of detail and a unique driving model. I went into MotoGP, jaw set grimly as I attempted to try and decode the specifics of a racing sim based on an activity I have no real experience of. I came out impressed with the strong racing model and surprised at just how much I enjoyed it – holding that tight line and braking hard as you move into the corner, easing onto the acceleration as you come out of a tight curve before smashing it down and overtaking the race leader. In terms of the tension and thrill of racing, MotoGP absolutely nails it.

What it perhaps doesn't nail is presenting this experience in the best light. Graphically, the bikes look fine and rider animations are solid (though I'd love to see riders turn their heads occasionally). The various tracks though faithful to their real life counterparts are less attractive. Racing games are perhaps the one genre where graphics are of huge importance, we like them shiny and pushing boundaries. MotoGP's can charitably be described as functional in this department – certainly not up to the standards of the big franchise car games.


Outside of the racing there are plenty of options in terms of modes, from reliving the previous MotoGP season's biggest moments, even down to driving the safety car (an odd, superfluous diversion in truth). There's a long-form career mode that sees you earning your stripes in Moto3, for a chance to race with MotoGP legends. This mode comes with a wealth of options along the way, such as team selection, or full-race weekends with practice, qualifying and warm-up sessions. Unfortunately, again here presentation lets things down, it's all a bit bland and grey. It takes cues once more from GRID and DiRT, installing you in a trailer as you travel the world. But while those games are heavy on bombast, with rivalries and slick soundtracks. Here you get a pile of contracts to root through and one single musical track that seems to be replayed on an infinite loop.

MotoGP lacks the polish and sheen of the expensive-but-it-shows car racing games that dominate the genre. If your primary attraction to racing games is the visual thrill and stylish presentation, you’ll be best served elsewhere. Fortunately, as a racing experience MotoGP is up there with the best. With a driving model that feels unique MotoGP 14 is the (almost) lone two-wheeler in a sea of car games and it does its sport proud. If what you care about is high-speed, precision driving and the tension of catastrophe lying in wait, then MotoGP 14 could just be your favourite new racing game.

The thrill of hitting a corner perfectly and weaving past your rivals as you accelerate out the other side. 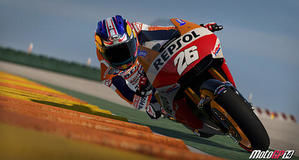