Imagine you are standing on a hill, with rows of roman centuries standing behind you, waiting for your orders

Imagine you are standing on a hill, with rows of roman centuries standing behind you, waiting for your orders. You suddenly give the order to attack a village and your soldiers surround the garrison and tear it down, freeing the people from their old masters, cause of your command. Well that’s what this title from Pyro Studios is all about.

When I first started playing praetorians, I didn’t know what to think, on one hand I thought this game doesn't look like its worth too much time, and on the other hand I felt that it can go somewhere. As I played the game more and more I began to realize I really like it. 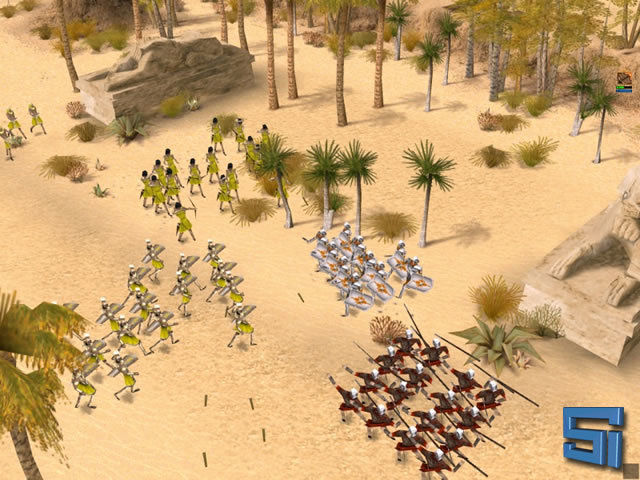 What really set this title apart from others was the fact that it mainly focuses on strategic combat rather then economy. You win a basic skirmish by eliminating your opponents forces (of course) but you don't do it by building a base like stereotyped other real time strategy games. You capture villages throughout the map and recruit groups of soldiers ranging anywhere between 15-32 men from the population of each village. The more villages you have, the more troops you can be recruiting at once. I like war personally much more then economy so all that really excited me.

I really enjoy a lot of the features you can do with your troops. From the famous roman “Tortoise” or turtle formation, to setting your archers on a cliff top already holding a arrow in their bows ready to fire as soon as they see an enemy. If you recruit a group of spearmen or pike men (depending on the civilization your playing as) you can set them in a immobile “stationary” position on top of a hill for some unsuspecting enemy unit to fall to. The maps terrain can be very effective with certain troops if you use it right. Enemy troops cannot see on top of a hill until they are there, and when they usually get there (playing against me at least) they run into a set of my roman spearmen. I much prefer the Romans of the other two Gallic and Egyptian civilizations you can play as. Hiding armies in trees waiting to give the enemy a surprise attack before he can get his spearmen into stationary position. 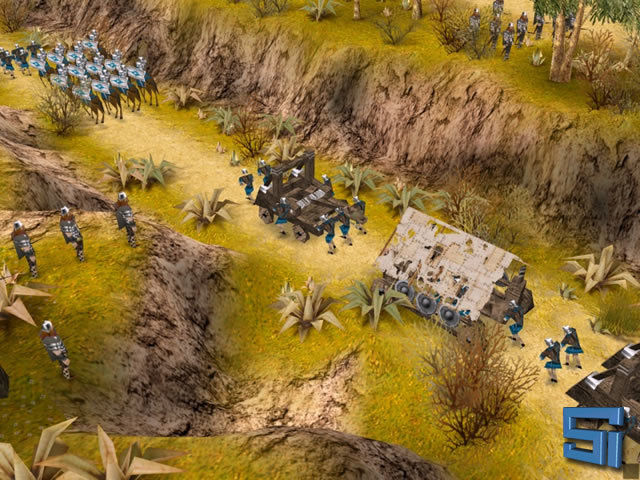 There is the honor point feature also. Honor points are gained by fighting, the more honor points you get, the stronger units you can build like praetorians, berserkers, and German cavalry. I call these kinds of troops “honor point troops”. This is to prevent someone from recruiting the most elite units out of a villages population at the start of a skirmish or multiplayer game.

There are of course with any game, some bugs that can set the game back a bit. For example with stationary spearmen with all their spears sticking out in front waiting for that enemy, attacking them in the rear will make no difference, the same damage is inflicted. Another bug would be what I call the “ghost effect”. No don't worry troops are not there after they die, but what I mean is some troops taking the space of other troops as you will quickly see. You can have 5 sets of roman legionaries in the terrain space it takes for only one. That bug makes it virtually useless to surround an enemy before attacking it. 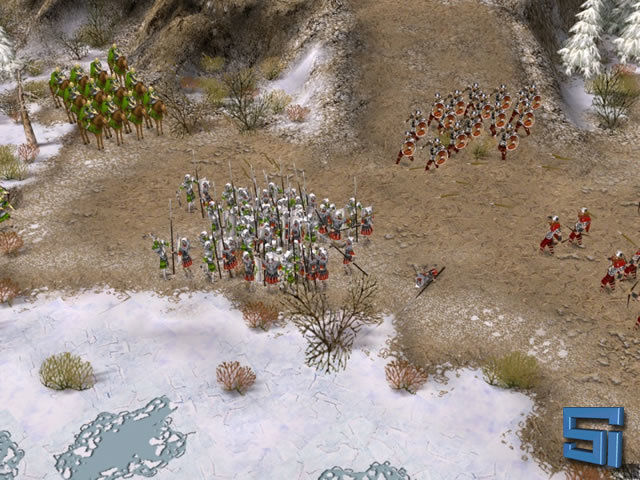 This game surprised me with how balanced it is. For the Romans it is the ability to throw pilums at an enemy to hurt it before attacking hand to hand. The legionary turtle formation to repel against enemy archers, and their spearmen being able to walk in a semi stationary position. For the Gauls, they have big stronger infantry but with that, the unit comes with fewer men in the unit. One unit of Gauls can defeat one unit of legionaries but with real good damage. Gallic infantry have the ability to sling rocks at the opponent temporarily paralyzing them so the Gallic infantry can attack. The Egyptians can have much (and I mean much) more troops then Romans or Gauls. To even them out, their troops are much weaker. The Egyptian officers can make whats called a mirage. They can make a unit of theirs or the enemies magically appear but it does no damage. Its just there to make the enemy think you have more troops and can really scare them if you make a mirage of a very strong honor point unit.

The campaign on Praetorians is not for ones who seek to win with ease. I had to replay and replay some levels many times, knowing exactly where hidden barbarians are in the trees and such before I could finally beat the level. There is only one campaign, which is a roman campaign but in it you have the chance to recruit Gallic and Egyptian troops Overall I really enjoyed the campaign when I finally finished it. 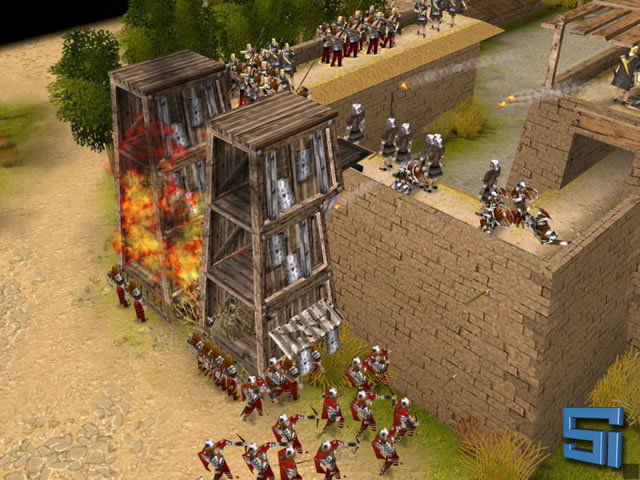 Graphics and game engine, two of the things that have the most effect on a first impression and long-term game play after that. Personally I think the games terrain and character art is nothing to vomit about, they are what most people would call outdated but are great for those of you with nothing special of a gaming computer. The engine is really nice too, but I think a lot of it went to waste. For those of you who plated a game like Priston Tale, then you know what I will be talking about. This game would have been even better if you could zoom in fully and see all the ground ahead of the troops, instead of just mainly overhead. Overall I think the graphics and engine are good, nothing to complain about. 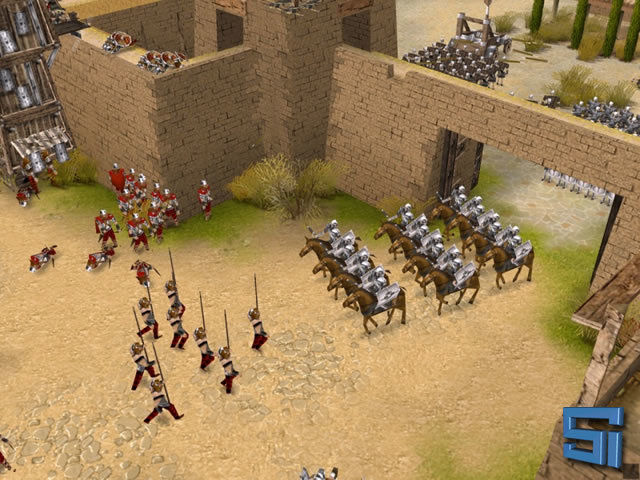 Multiplayer is generally good, but not friendly to most router owners. Ever since I installed a router I have not been able to connect to multiplayer games. Before the router, I've had months of great fun with online Praetorians. The game may seem simple, but the amount of tactics and strategy that are discovered and can be used online cannot be counted. A typical multiplayer game can last anywhere between 20 minutes and 4 hours. I would call the game fun for the whole family! Multiplayer games are done through Gamespy Arcade service. But if you know the IP address of the game you want to join then of course you can connect through direct IP. The games can range from anywhere between 2-8 players, with maps supporting player number of two, four, six, and eight. The maps are even for all sides with cliffs, bushes, pathways, and lakes everywhere that can be fully taken to your advantage.

In summary, I would say this game is a must for those of you whole love fast action and strategy. This game is very friendly on weak computers and will offer you hours and hours of fun if you let it. With multiplayer maps stretching from desert oases to tree filled hilly lands for those dreaded surprise attacks. For those of you who love a real challenge, have fun trying to beat the campaign! 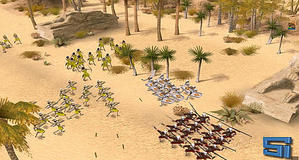