Sam returns to remind us what the shooter is capable of

Over the past few years, the FPS has become an increasingly constrained and controlled experience, to the point where it is now little more than an epic game of follow-the-leader, a point-and-click adventure in which every puzzle involves combining your bullets with an enemy’s face. The scale and spectacle of the gamers’ staple might be grander than ever, but it is evermore a spectacle to be watched rather than played.

Playing Serious Sam 3, therefore, is the FPS equivalent of emerging from a long, dark corridor into a sprawling, undulating meadow, feeling the grass on your fingertips and the sun on your face. It liberates the FPS from its cinematic chains, and because of this is one of the most refreshing shooter experiences in years, despite the fact that it doesn’t really do anything particularly innovative with the genre.


In fact, for the first few levels you’d be forgiven for thinking that Sam had just returned from a Modern Warfare training camp. With the initially highly urbanised setting, spectacularly collapsing buildings and fairly restrictive levels, it feels worryingly close to pushing us back into that dark and endless corridor from which we’ve just escaped.

Then the aliens start squishing all humans because squishing all humans is the other thing that aliens do, and only way to save humankind is to use an enormous portal-device called the time-lock. Precisely how this will help is not revealed, but Sam was never one for logical explanations, and happily leads a mission to Cairo to find a scientist who knows how the time-lock works.

There’s a sense that the initial levels are something of a parody of modern shooters. Yet it’s also been quite some time since the last Sam game, so they also serve as a warm-up for Sam veterans and as a comforting, familiar environment for newcomers brought up on a diet of duck a la Modern Warfare with a Battlefield joux.

These early stages are mostly acceptable, but hardly special. The game takes a while to hit its stride, and forces you to use the same three weapons for far too long. What’s more, it gets worse before it gets better. The second level – a museum filled with annoying spider-aliens – is easily the weakest of the lot; a depressing series of grey-green rooms spent fighting the same dull enemy.

It does get better though, and in the most spectacular fashion possible. As central Cairo fades into suburbs and the monumental remnants of history, the levels widen and the enemy numbers grow. Then, around level five, it explodes, and it doesn’t stop exploding. The game becomes a relentless succession of supernovae, each subsequent blast birthing an even bigger star, just to pop it once again with its cosmic pin.


Oddly though, the most remarkable thing about Serious Sam 3 is not its scale, but its pacing. Throwing countless numbers of enemies at the player is easy to do so long as the engine can handle it. Keeping it fresh for fifteen hours requires masterful design, and in this Croteam have unquestionably proven themselves masters.

The weaponry the game equips you with is always just enough to deal with what it throws at you, and the levels are always just the right size to evade the hordes of enemies charging in your direction. The overall effect is a constant feeling that the game has reached its maximum intensity, the highest pressure your puny form could possibly withstand. And then, impossibly, it punches through that assumed ceiling and another hundred beheaded kamikaze’s fall on your befuddled face.

Pacing doesn’t mean prescription, however. As I said, the environments incrementally become more open, and the game encourages you to use that space, to create your own methods of overcoming the odds. Nay, it demands it. In order to succeed, you must become a self-made Sam. Bulletstorm boasted creative shootery, but in actuality was a very controlled, prearranged experience. Here the floor is yours, and you can use the adversarial multitude to mop it how you will.

It’s an incredibly kinetic game too. Smart use of pace and direction is as vital to overcoming the astronomical odds as reaction-based pointing-and-clicking. Charging directly at a lone Kleer skeleton before unleashing a double-barrelled blast of buckshot into its ribcage works well, as does timing one of the newly-included melee attacks to pull its head off. Up against twenty of the blighters, however, quick-feet to a machinegun beat is more effective. Additionally, while running backwards is often a necessity, sometimes there’s nowhere to retreat to. Instead you’ll need to skilfully weave between enemies, spinning, strafing and pirouetting in an ad-hoc bloody ballet.

And it is bloody, very bloody indeed. There’s no getting away from the fact that it’s an astonishingly violent game. It’s absurd, comic violence, though, a theme which extends to Sam himself. He’s a slab of sheer brawn, all wisecracks and testosterone. Yet unlike Duke Nukem in his last outing, Sam is amusing rather than misogynist and offensive. My favourite Sam quip comes fairly early in the game when Sam faces his first Major Bio-Mechanoid – a hulking, rocket-spewing monstrosity with a face like a hungry arse – upon encountering which Sam simply says “Well, aren’t you adorable?”

In terms of design, then, BFE takes the best of what the shooters of old offered, and puts it into a lovely modern engine. The trouble is, that’s really all it does. Don’t get me wrong, Croteam’s execution is masterful, and the game an absolute joy to play, but it also offers hardly anything that’s new. I don’t mean that within the context of the FPS – it’s been so long since we’ve seen anything like Serious Sam that it feels astonishingly fresh - I mean it within the context of the series itself. In terms of weaponry and enemies, almost everything in BFE has been recycled from the previous games.

For most of the game, this isn’t a problem, but it stops providing new enemies and weapons to shoot them with a good few hours from the end. Were it not for the colossal scale of the action in the endgame, it would very quickly stagnate. I suppose there’s variety in the cooperative and survival modes, but the dearth of new content is still somewhat disappointing.

Nevertheless, I am extremely glad of Serious Sam 3’s existence. It serves as a timely reminder of how shooters don’t need to be highly restrictive rollercoasters that heavily manipulate the player in order to create intensity and epic spectacle. The complete failure to innovate even within the context of its own series is unfortunate, but genius design and perfect pacing ultimately make up for this. It is unlikely that Serious Sam 3 will be remembered in twenty years time, but hopefully developers will remember it long enough to learn a thing or two about what the word “game” means.

Nevertheless, I am extremely glad of Serious Sam 3’s existence. It serves as a timely reminder of how shooters don’t need to be highly restrictive rollercoasters that heavily manipulate the player in order to create intensity and epic spectacle. The complete failure to innovate even within the context of its own series is unfortunate, but genius design and perfect pacing ultimately make up for this. It is unlikely that Serious Sam 3 will be remembered in twenty years time, but hopefully developers will remember it long enough to learn a thing or two about what the word “game” means.

Watching a devastator shell rip through enemy ranks for the first time. 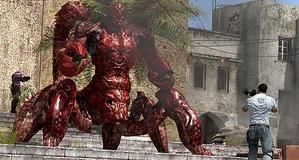