Attempting to rejuvenate the arcade skateboarding genre, Shaun White Skateboarding charges you with freeing an oppressed society by kick-flipping colour back into a grey world. While the narrative goes off the deep end in brave and hilarious ways the gameplay itself struggles to keep up with such lofty ambitions, meaning the battle between frustration and enjoyment is never resolved.

What will astound you as the screen saturates to grey in the first moment is how utterly ridiculous the story to Shaun White Skateboarding is. Set in the open-world city of New Harmony you quickly learn that the entire populace has been oppressed and converted into lifeless drones by the evil Ministry.


With Shaun White captured because of the restorative effects of his board on the dull world, possession of his messianic deck is soon passed to you. After taking some time to create your character you begin your journey to “free the minds” of everybody else and take down the Fascist Ministry regime using the power of the, er, grind.

The great part to this ridiculous setup is that the game never takes itself seriously at all. Thanks to the constant references to freeing one's mind and the nature of the Orwellian state I felt like the developers read Orwell's 1984, watched the Matrix trilogy and then went on a 7-day bender before having their first pre-production meeting.

The bizarre outcome of this alleged process is a wonderfully camp portrayal of skate culture with enough knowing winks and 4th wall-breaking moments to have you breaking out in a grin as you play.

This madness begins once you break out of the Ministry and meet up with a mysterious, middle-aged man called Jonah. Dressed as blandly as the Ministry itself he soon puts you on the path to enlightenment, “freeing” other dudes that will help you along your journey. In this way you'll resurrect the skate shop, enabling you to buy more tricks and accessories and eventually meet up with the Rising - a resistance movement so full of spaced-out characters you wonder how they all got up in the morning.

The actual gameplay is all about “Flow” - a three level gauge that builds up as you pull off tricks and flips. By building up this flow, man, you influence the world around you turning the grey Ministry-oppressed society into colour and vibrancy. The more flow you have the more buildings, people and structures you can breath new life (or graffiti) into and resurrect from their grey slumber.

This process is immensely satisfying and sending explosions of colour throughout a grey world, altering its very structure is one of the games strongest attributes. Watching trees erupt from the tarmac and ramps ripping up from underneath your deck as you land a trick is intensely gratifying - making this far more than just a visual gimmick.


It's not just a matter of learning the traditional moves either. As well as the usual skate parks and public structures you can use to grind and perform trick on are a few more ethereal elements. Certain green rails will magically extend into the air as you grind on them, taking you to previously unreachable locations and allowing for some ridiculous and lengthy grinding opportunity.

Eventually you'll have complete control over the direction of these magical rails, enabling a level of freedom that's initially difficult to control and sometimes unnecessary. More than once I ended up grinding into the ground or making a rail so steep I couldn't get up it thanks to the controls being a little fiddly.

Larger green platforms enable you to get up to higher levels as well or make half pipes to assist your trickery. These holographic structures feel right at home in the game's narrative simply because the story that holds all this together is just as ridiculous.

Unfortunately the actual skating mechanics and controls let this premise down at times. Making simple tricks and staying on your board is very easy but pulling off a lengthy combo? Not so much. Thanks to the unresponsive controls and the difficulty in quickly building up speed means stringing a series of tricks together is unnecessarily hard.

The repetitive nature of some of the objectives doesn't help its shortcomings either. Tasks such as eliminating Ministry cameras by linking up green rails or taking down armed Zeppelins requires a precision that the controls just don't allow for.

Multiplayer has a few good competitive modes that are available both over the internet and locally. Sadly, there was very little in the way of an online presence at the time of this review but it's refreshing to see local split-screen implemented.

The various modes are enjoyable but nothing that's going to keep you occupied for very long. Most centre around maintaining a good flow score or converting Ministry buildings while the other player tries to steal them back. There's a free skating mode that allows you to goof around with a friend but the absence of any drop-in drop-out co-op feels like a bad omission.


Regardless of these faults Shaun White Skateboarding is still an enjoyable romp. The stereotypical characters you meet are frequently hilarious and the game taps into the right nerve centres when you're tearing down Ministry propaganda to make it a compulsive experience.

Though it lacks the direction to make itself a pure arcade skateboarding title it has enough humour, self-awareness and interesting gameplay to be worthwhile. If you're prepared to accept the slightly awkward controls and brave new world of its story then Shaun White Skateboarding has much to offer.

Top Game Moment: Landing your first trick and seeing the world around you blaze into colour. 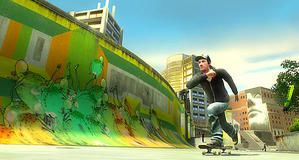