A great shooter in single-player or co-op, but is it a stiff enough drop of Earl Grey? 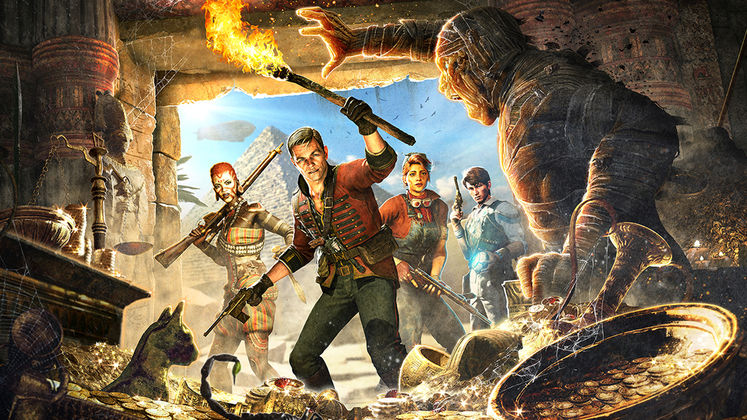 Strange Brigade is the latest co-op shooter from Rebellion, creators of the Zombie Army Trilogy (to which this is a spiritual sequel) and Sniper Elite, so there’s a fair bit of expectation on its shoulders. This year has already seen the release of another co-op shooter, Warhammer: Vermintide 2, and while that’s great in co-op it’s not so fun in single-player. 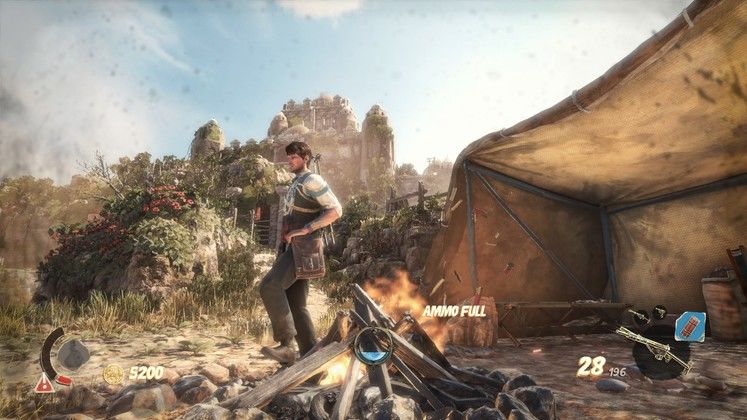 The titular Strange Brigade are a group of international misfits and adventurers, who explore the world in a blimp looking for evil to combat and loot to acquire. On a routine mission to find some missing fellow adventurers, they discover that the dark ancient Egyptian queen Seteki has been unleashed, and it’s up to them to stop her and her army of the undead.

The story is really take it or leave it, and while is designed as epic in mind (we love the storm clouds gathering on the final mission) it never quite pulls it off. There aren’t any locals to talk to for a start, but Seteki herself is probably the root cause of this, as while she puts in some very brief appearances she’s mostly relegated to shouting “you will all die!” or “the power of Seteki!” during encounters. She could’ve been a much more interesting villain, or at the very least appeared in person a lot more. The dead pirate captain Tiberian appears more, makes pirate puns, and is far more fun - why couldn’t he have been the main villain? 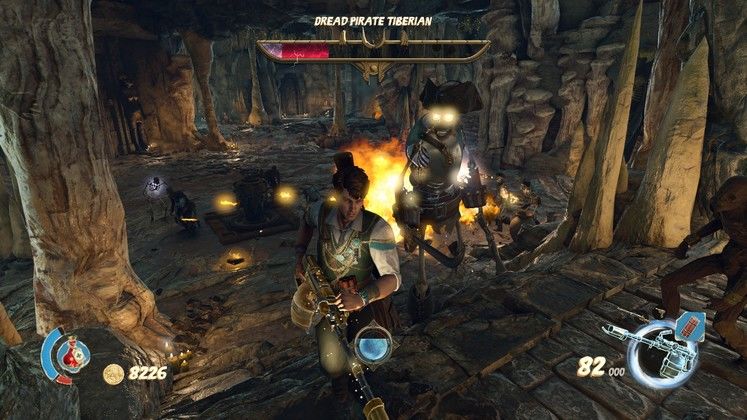 Fortunately the story isn’t why you’ll play Strange Brigade, either single-player or co-op, and it’s serviceable for what it is - which is an excuse to shoot a lot of undead mummies, zombies, and skeletons. Fortunately that’s a lot of fun, and that includes single-player. We played the campaign solo first. A single playthrough took us around 11 hours and we thoroughly enjoyed it, so simply based on that Strange Brigade is well worth getting. The constant highly-British narrator is fantastic, and we particularly love how he points out everything, from doing a fancy roll to leaving the game alone without pausing.

The shooting is pretty satisfying, and while it’s a little disappointing you can only carry one weapon at a time you can change it at any checkpoint. The addition of magical Amulet powers (which can also be changed), which have to be charged with enemy kills, add a lot to combat as it’s just fun to unleash a devastating special attack now and again. 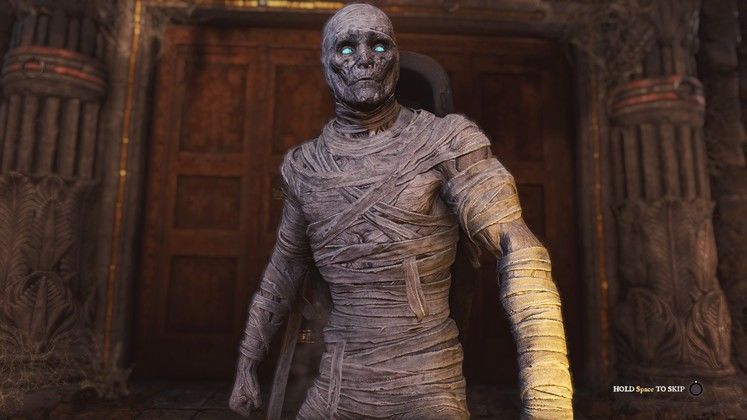 Levels are a mixture of shootouts, exploration, and puzzle solving, and they’re never boring. The levels are well-designed, with a general set path mixed with multiple side-paths to uncover or explore. Traps are quite fun and really spruce up combat, as half the time we didn’t bother shooting and just tried to get as many zombies as possible into the spinning blades or flame pits. Then there’s the ridiculous amount of secrets hidden in the levels, and despite our scouring we failed to find most of them.

The worst thing we can say about levels is, relatively, a lack of variety. Oh, they’re all very different, but the big problem is the level Cut-Throat Caverns (which you can see in the video below) which is pirate-themed, and the only non-Egyptian level in the game. Once we hit it we were actually disappointed when we had to return to Egypt. Egypt’s great but, well, a globe-trotting adventure is better than a one country adventure. 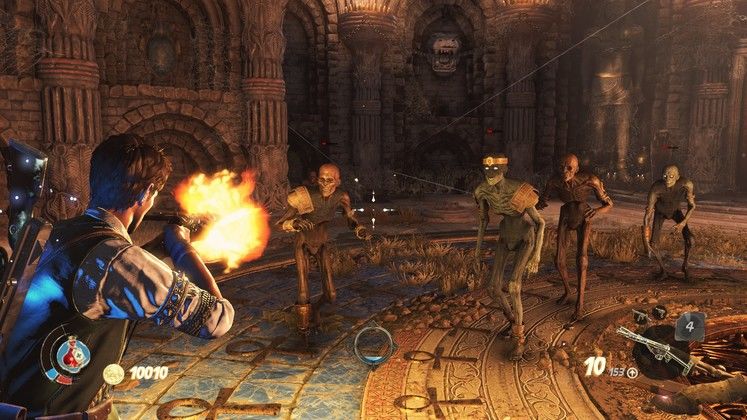 Our system is an AMD FX-8300 Six-Core Processor, 16 Gb RAM, Nvidia GTX 1050 Ti 4Gb, and Windows 10 64-Bit, and it ran Strange Brigade in DirectX 12 in full settings with nary an issue. There is a Vulkan option too. The game looks pretty darn lovely too.

Most importantly, having previously played the game on a console gamepad, shooting is just so much better on PC with mouse and keyboard. You can point at a trap trigger and shoot it immediately! With speed regularly important, it’s a godsend. It makes the game a little easier, but that’s what harder difficulty setting are for. 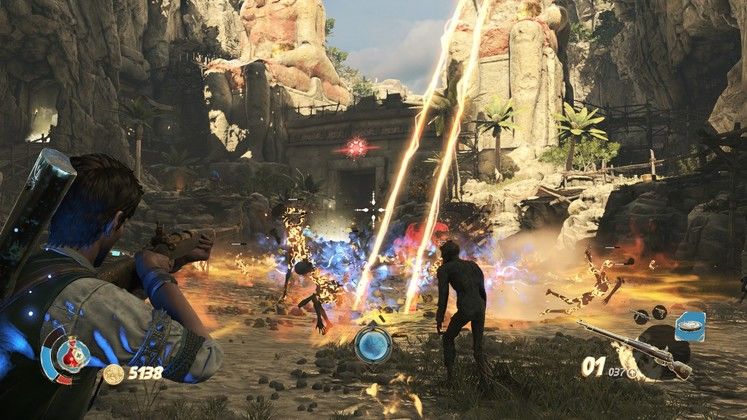 Score Attack and Horde Mode are a lot of fun for co-op, but the main meat is obviously the entire eight-mission campaign with up to four players. This can go two ways: either you’re with friends on voice chat, or you’re playing with randos. The difficulty is a little harder and enemies take more shots, but that just means it’s more fun.

Without a doubt, friends and chat is the way to go, since you can coordinate attacks, ask for revives, drop health potions, and most importantly highlight secrets. If you’re playing with random people, do not expect any sort of secret-gathering to happen. It’s a shoot-em-up. Your teammates will blast ahead, so don’t even expect to take on that maze together. On the other hand, if you want to have a mad fun shooter time, Strange Brigade works just as well as Zombie Army Trilogy. 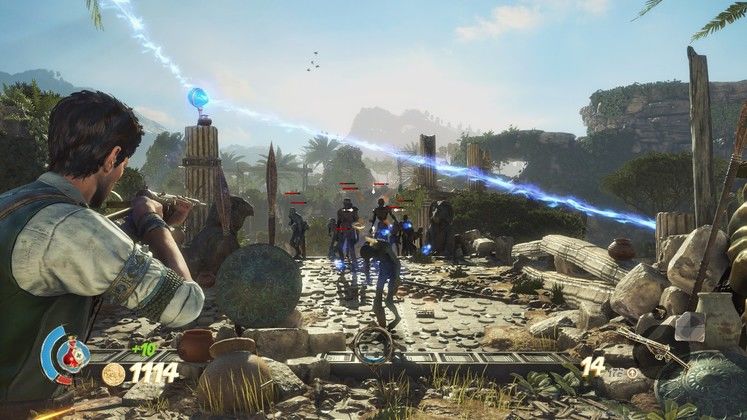 If we have one concern about the multiplayer though, it’s the longevity. Now 11 hours for a single-player playthrough is no slouch, and you can at minimum double that for a co-op campaign, other modes, and secret collecting, so it’s a stupid thing to complain about… but we have to compare it to the likes of Left 4 Dead and Vermintide 2, which manage to feel different every time you play them, just from random enemy placements. Everything in Strange Brigade is static, so all the secrets and enemies will stay the same. Not a deal-breaker, but then not a game you’ll play as much as Left 4 Dead, either.

Strange Brigade is tip-top fun with lots of bang for your buck, to use a dirty Americanism. A single offline campaign playthrough with a decent amount of exploration can run around 11 hours, and that’s before you bring in the Co-op, Horde Mode, Score Attack, and secret hunting. Crucially, it’s all incredibly fun, with entertaining shooting, a good level of challenge, hilarious traps and a good-natured atmosphere.

Yes, Seteki is a bit of a boring villain, and the constant Egyptian setting does grow a bit tiresome even with the awesome pirate caverns to break it up (and that’s more of a tease of what might of been than anything). Most importantly, it doesn’t quite have the longevity of other co-op peers such as this year’s Vermintide 2, as the levels and enemy encounters basically stay the same.

These are all minor things though, since all that matters is: Strange Brigade is enormous amounts of fun whether you’re playing in co-op or single-player, and you’ll more than get your money’s worth from it.

The pirate level and the battles against the Dread Pirate Captain Tiberian. He totally should’ve been the villain.