The Templars were accused of worshipping Baal, just like David Brown, making him the ideal person to review it for us

If you learn one thing from playing The First Templar, the new action-adventure medieval romp from Haemimont Games, it's that you can find experience points hiding in chests that just happen to be lying around the place. It doesn't show you what it actually looks like, but a tangible entity it must be. How else can you find 500 XP in an otherwise empty chest?

Silly rewards aside, First Templar (FT) sees you, a warrior of the Lord, battling your way across Europe with a variety of companions along for the ride. As Fashionable Beard Templar Man, you're desperate to uncover the secrets of the lost Holy Grail and after years of research, you've finally got a lead.

Popping over to Cyprus to have a chat with the Grandmaster, you discover some bandits are terrorising the place. After doing the hero stuff with your brother, Angry Stubble Templar Man, you set off on a quest to find a woman you might know more about the Grail, so beginning a mythical quest across the continent and into the war zone that is the Holy Land.

Each of the two brothers has a reasonably distinctive combat style and can be swapped between when playing on your own. There's a co-op mode that allows a human to take control of your sidekick, which is a much more fun way to play, especially as some moves can only really be pulled off when two people are pulling together to achieve it.

Although it's potentially entering spoiler territory to say this, you obtain another partner, a female one, later on and her combat style is definitely different to the two lantern-jawed brutes you control initially. She wields daggers for a start and is a rogue to your main character's warrior.

As is generally the order of the day in modern times, all the characters get unlocks depending on how thoroughly you explore the environments and your willingness to embark on optional objectives marked in blue on the mini-map. In a nice touch for the lazy sods like your correspondent here, the game tells you on what level each piece can be found. Which is nice.

The action takes place from a third-person perspective and the combat is typical for the genre. It's all about timing your blocks and trying desperately not to over-click and get caught in an animation while enemies descend on you. If you do get swamped and lose all your health, you go to ground and have to be revived by your ally, who can only get you going again if they have filled one of their Zeal Orbs.

Health comes in the form of Toughness Orbs, each of which has a health bar associated with it. If you have four orbs, you get four health bars to go through before you are out of the fight. Zeal orbs allow you to perform special moves and to revive your fallen comrade, and they need to be charged up by striking enemies.

It could just be that your correspondent here is rubbish at these types of games, but the combat doesn't really flow or feel as satisfying as it is in other titles of the same persuasion. Having said that, there is some degree of “actually, that's pretty cool” to be had from some of the finishing moves.

Most of the time, it feels like the lower budget title it is, with a lack of polish all round. No more so is this in evidence than in the voice acting, which is truly abysmal at times. The main character is a monotone bore, but at least he doesn't get on your nerves, which is more than be said for the vast majority of the NPCs.

Your character runs in a very strange way too, which is always noticeable (as you're running around a lot) and always disconcerting. Who jogs about while leaning forward at a 20 degree angle? It looks like he's going to fall flat on his face any second.

Luckily, while he can't quite master the act of moving quickly without overbalancing, he and his friends all have an impressive array of abilities to unlock via the magical medium of levelling up, which is where those solid gold XPs come in handy. Cunningly shaped into a Templar cross, the upgrade screen has dozens of interconnected abilities to upgrade to, each one unlock a further link in the chain.

The further you advance in any direction on the cross, the more powerful and/or complex the ability becomes, giving you generous buffs or just revealing a devastating combo you can perform during combat. It's one of the areas of the game that impresses.

In terms of overall quality, we're talking 'Rise of the Argonauts but not quite as polished'. It's clearly meant to be played cooperatively rather than on your own, but there's always going to be the question of finding anyone who actually owns the game to play it with you. On the PC, however, there's all sorts of faffing about creating accounts in order to even set yourself up to play with another player, which immediately puts a dampener on things.


The whole affair just suffers from a lack of polish all round. The combat's passable but lacks any oomph, the visuals are passable while veering between expansive vistas and low quality textures up close, and the sound is mediocre at best. While it has some nice touches, like the expansive upgrade options and the fact it tells you where the outfit unlocks can be found, it's nothing more than a reasonably solid, entirely unspectacular third-person adventure that'll almost certainly sink without a trace and with barely a whimper.

Oh, and to make the obvious joke, this will almost certainly be the first and last Templar you’ll be seeing for a while. 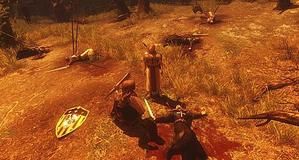