The Wolf Among Us Episode 1: Faith

The Wolf Among Us Episode 1: Faith Review

Chris Capel finds out if Telltale Games are crying wolf

In February 2011, Telltale Games made the stunning announcement that they had five games in development. In the two years and eight months since then they’ve released three of those, cancelled one (King’s Quest), and have just the title based on DC Comics’ Fables series still to go. They’ve also gone from being “those guys who make the cool Sam & Max episodes” to a multiple Game of the Year awards winner with The Walking Dead. Telltale now have a lot to prove with their Fables game, now out and called The Wolf Among Us (presumably to avoid comparisons with a certain popular Microsoft-owned RPG series), as they have to show they can follow up The Walking Dead and beat second-album syndrome. No pressure, guys.

The Fables comics are based around the idea that a load of fairytale characters are forced to flee their storybook world and move in to New York, using a magical spell called “Glamour” to blend in, and despite being based on children’s stories the comics are decidedly adult in theme. The Wolf Among Us follows Bigby Wolf, the former Big Bad Wolf trying to clean up his ways by becoming the sheriff of Fabletown, as he and the Deputy Mayor’s assistant Snow White try to solve a rather bizarre murder. To say things get dark and shocking would be an understatement, but you won’t find any spoilers here.

I’m going to say right now that if you’re wondering if The Wolf Among Us is better than The Walking Dead, it’s not – in my opinion, it’s better. It’s only the first episode but even though I nominated The Walking Dead as my game of the year last year I can say immediately that I’m already more invested with this story than I was with Lee Everett (and that’s saying a lot). The first part of this has to do with the story, and although I won’t mention spoilers it twists in ways I didn’t expect (and fans of the comic definitely won’t expect). It keeps building the intrigue all the way through, and at the end of the episode I felt like screaming because I knew I’d have to wait before I could carry on. George RR Martin fans know exactly what I’m talking about.

Gameplay-wise it should come as no shock that it’s hugely similar to The Walking Dead. Choice and consequence-based storytelling, quicktime event-based action sequences, and occasionally the odd small area to roam around in looking at things. While on the outside it seems that there isn’t much gameplay outside of a choose-your-own-adventure, there’s a lot more than there initially seems. Every little choice you make changes conversations, people’s attitudes towards you, whether you get out of a situation cleanly or messily (or not at all), even to the extent of characters living or dying or the story completely changing depending on whether you went left or right. Telltale pulled this off superbly in The Walking Dead, always making the player feel responsible for their own story, and in this first episode The Wolf Among Us does it just as amazingly well.

In fact it does it better here too, for two reasons. Firstly, The Walking Dead occasionally brought in proper adventure game-style puzzle sections now and again, which worked but slowed the pace and regularly felt forced. The Wolf Among Us ditches them in favour of “investigations”. Bigby’s a detective after all, and whenever he’s called out and allowed to explore there’s usually a crime to uncover. For example after being called round to Mr Toad’s apartment it’s clear that something happened he’s trying to cover up – you then have to explore his apartment, find evidence and catch him out in a lie. It’s a lot more fun and fits more naturally into the plot than Walking Dead’s puzzle areas.


Secondly, I love how the dialogue choices clearly and obviously allow you to make Bigby your own character. Lee in Walking Dead had this to an extent but I never felt I was creating his own personality – with Bigby Wolf you can make him nice, a dick, uncaring, or others just by going down that dialogue route. His entire posture changes to reflect your choice, so it’s not just picking “shut the f*** up” and watching Bigby say it but not act it. While the bond between Lee and Clementine was truly special I already love playing Bigby Wolf and I’m eager to see how things go with him and his relationships moving on, especially after the shocking cliffhanger ending... eek, no spoilers.

In fact I love all the characters in The Wolf Among Us, which I certainly couldn’t say about Walking Dead (sorry Larry but you’re still an arsehole). Some are from the comic, like Bigby, Snow White, Beauty and the Beast and Bufkin (the alcoholic winged filing monkey), while others are unique to the game, like Mr Toad, Grendel, the Woodsman, and the Tweedle brothers. All would be interesting characters even without being famous story figures, and having such a well-known backstory to go off of only increases the interest I felt towards them. The Woodsman is the only character to ever have defeated the Big Bad Wolf in a fight of course, now he’s a drunk who likes getting into fights for the hell of it. Mr Toad is a landlord of a crappy apartment block, steals cars, swears a lot, but always looks after his son. The romantic awkwardness between Bigby and Snow White is just great too. You’ll care when something bad happens to any of these characters... and bad things will happen.

Then we have the graphics. It’s still the “Telltale Tool” engine, and they’re basically reusing the cel-shaded style used in The Walking Dead... and yet The Wolf Among Us looks vastly better. The dull, realistic colours of Lee’s journey have nothing on the technicolour New York Telltale have created. It sounds a cliché but it honestly looks like a comic book come to life – there was one shot about halfway through of a static street and I honestly thought it was a panel from Fables, then Bigby walked into shot and I finally noticed the subtle 3D modelling. The art style is lovely and imaginative, and the animation brings it all to life. Telltale made great strides in conveying emotion with their last game, but they never had to work with a constantly-moving giant toad in a suit before. Every character is full of expressions and all believably show what they’re feeling, and that’s no mean feat when you’ve got humans alongside talking pigs, toads and monkeys. Props go to the voice actors too who do a great job, and I absolutely promise that next episode I’ll actually write down their names after the credits. Ahem.
Can I think of anything bad to say? Well, some of the dialogue choices give you such a short time to respond you sometimes can’t read them all before time’s up, and at least one QTE is an absolute cheat – it doesn’t matter how hard you hammer that ‘Q’ key, you can’t win. And that’s it, really, other than that Faith is still only the first episode of a series and is only about two hours long. You won’t get stuck, you won’t be slowed down, and while there is gameplay it’s based on making choices and discovering things rather than challenge. If that’s a problem for you don’t play it, but you’ll be missing out.

With just one episode to go off of I’m still prepared to bet that unless Telltale screw up massively I’m going to end up thinking The Wolf Among Us is better than Game Of The Year contender/winner The Walking Dead in a few months’ time. The characters are all interesting and have compelling relationships that I’m eager to learn more of, the shocking detective story at play already has me desperate to continue like only the best storytelling can do, and the art is just amazing. I happily played through the entire episode in one sitting, something I didn’t do for any of Walking Dead’s episodes, as I just couldn’t stop playing. We’re only on episode one now, but if people are calling The Wolf Among Us game of the year by episode five (or even three) I wouldn’t be at all surprised.

THE WOLF AMONG US EPISODE 1: FAITH VERDICT

With just one episode to go off of I’m still prepared to bet that unless Telltale screw up massively I’m going to end up thinking The Wolf Among Us is better than Game Of The Year contender/winner The Walking Dead in a few months’ time. The characters are all interesting and have compelling relationships that I’m eager to learn more of, the shocking detective story at play already has me desperate to continue like only the best storytelling can do, and the art is just amazing. I happily played through the entire episode in one sitting, something I didn’t do for any of Walking Dead’s episodes, as I just couldn’t stop playing. We’re only on episode one now, but if people are calling The Wolf Among Us game of the year by episode five (or even three) I wouldn’t be at all surprised.

The absolutely stunning heart-in-mouth ending comes to mind. To Be Continued…

The Wolf Among Us Episode 1: Faith Essentials 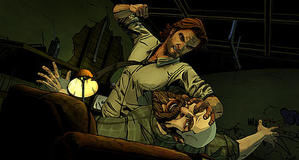