The original Wings was a 1990 WW1 arcade action game for the Amiga. It was hailed by critics for its addictive gameplay and uniqueness, and some people consider it one of the top Amiga classics. An initial attempt by developers Cinemaware at funding a remake fell well short of a 350k goal on Kickstarter. The second rather less ambitious attempt which only asked for 85k crawled over the finishing line. It’s the first title released under the Cinemaware label in over ten years.

The game consists of three distinct arenas of gameplay which are interspersed by a text-based story presented from a first person perspective, in this version also with an audible narrator. The story is charming and, with the music, has a distinct WWI-era feel, but it’s hardly enthralling. The three types of gameplay are all arcade-like in nature, but are also quite distinct from each other. 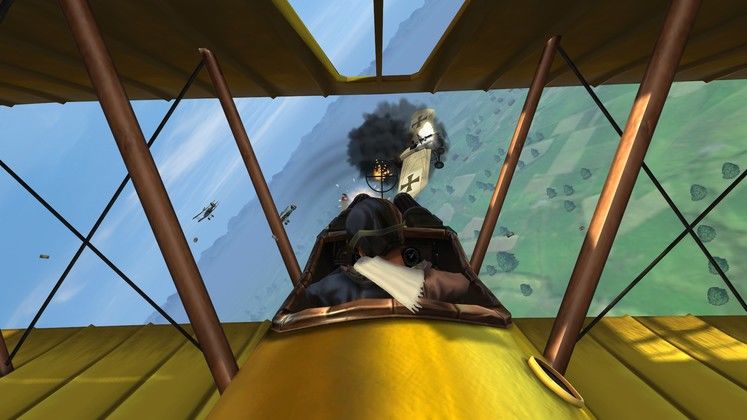 It's definitely prettier than the original, by some way.

The first, and more or less main, type of play is basically a 3D flight simulator in which you must destroy a small number of German planes, sometimes also being required to destroy a handful of Zeppelins. You’ve no radar so the first minute is spent panning the horizon to work out where the heck the enemy is, and after that it’s classic dog fight action. If you fire your guns for more than about three seconds they jam and you’re left toothless while you wait for them to start working again. Death can come brutally quickly, particularly if you make any kind of physical contact with another aircraft. There’s no doubt that taking down enemy planes is satisfying, particularly the way they crumple and explode.

The second segment is a section which involves strafing, the act of flying low with an aircraft and blasting targets with machine gun fire. This takes place in a top down 2D environment with your guns aimed at a fix spot about a third of a screen’s length in front of you. Your mission objectives vary between killing infantry, blowing up trains, blowing up trucks, destroying tents, and so on. Meanwhile, you’re expected to avoid hitting any red cross vans, and dodge the anti-aircraft and infantry firing at you, which really isn’t that difficult to do. Bizarrely, in this segment you are highly punished for wasted ammunition, if you don’t end with a decent percentage hit rate you are given a reprimand. Reprimands are given for miserable mission performance, three reprimands and you need to start a new pilot or go back to the last save point.

The third type of gameplay featured in the title is a bombing run. This also happens in a top down 2D arena, but this time your guns are aimed straight forward for fighting off opposing planes and you have a secondary fire which allows you to drop bombs. You are given a very limited number of bombs and at the start of the segment you are shown a picture of the target you need to destroy, normally a building. Using the shadow of your plane to judge, you need to correctly identify and bomb the target whilst avoiding anti-aircraft fire. Potential hazards include wasting your bombs on the wrong target or just missing it altogether. 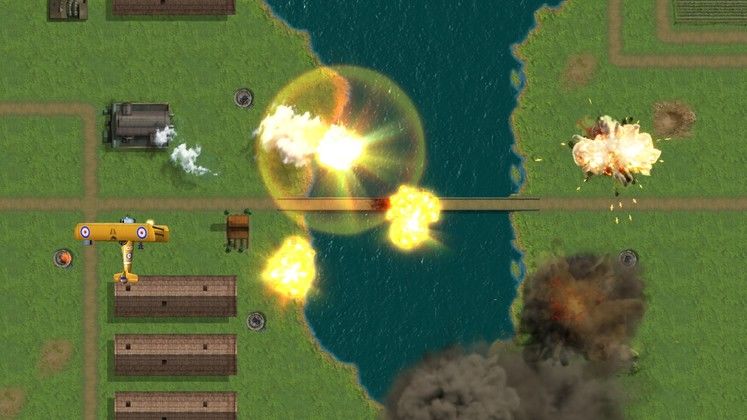 These sections involve bombing strategic targets, like this bridge.

These three sections are layered in a more or less random fashion in a level by level format. About every three levels your pilot is auto-saved so that if you die or accrue too many reprimands you can auto-reload to just a few levels previous. The difficulty of all three gradually increases throughout the game, in the 3D section, for example, the German planes slowly increase in number and skill level and your wingmen slowly decrease. Likewise, in the bombing sections there are more anti-aircraft weapons, enemy planes, and so on.

It certainly succeeds in presenting simple arcade action based entertainment, but it is also very simple; as you might expect from a 1990 Amiga title. Personally I didn’t find the game terribly compelling despite it being fun, and I have a suspicion that 24 years ago I might well have. It makes me wonder if this kind of gameplay is showing its age. The fact is you’re really doing very little, and yes it does require skill, but it’s very basic. 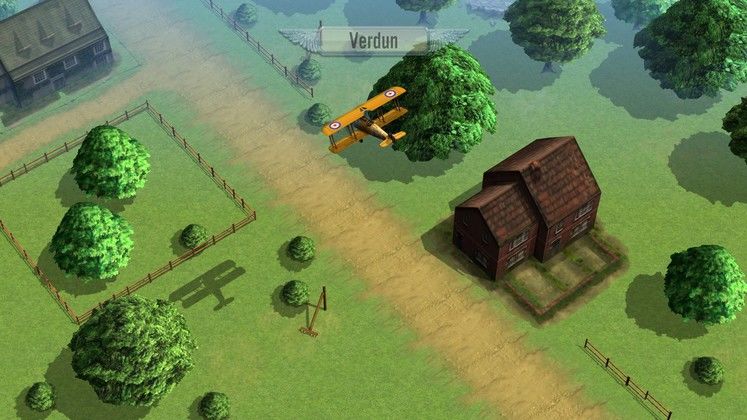 Judging where your gunfire is going to hit is a little difficult in the strafing sections.

It’s difficult for me to definitively say how faithful a remake this is because I never played the original, but I’d hazard a guess that it’s pretty damn close. The major changes seem to be in terms of the graphics, music, and sounds. By all appearances, the gameplay is extremely similar. As a result, fans of the original could well appreciate the nostalgia of this release. As to whether the series will find itself a new fan base, I’d seriously doubt it.

It’s clear enough isn’t it, if you remember this Amiga classic and you’re well up for round two then maybe it’s worth picking up. It’s not a full priced release anyway and it seems that they’ve done a pretty good job of capturing the essence of the original but with a new lick of paint. However, for the people who are still wondering what the hell this actually is, I can’t really recommend it. As much as one can kick back for ten minutes playing Pac-Man just out of retro respect, let’s not pretend it still gets a look in against modern releases.

The flight simulator parts are the most enjoyable, particularly taking down the enemy craft. 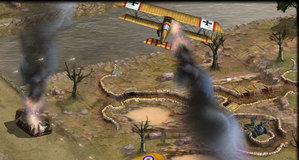