Rather than battles and quests, Always Sometimes Monsters is a game about relationships and human interaction. There's not a goblin in sight. Unless it's a metaphorical goblin representing your jealousy, greed and emotional manipulation you monster.

Indie developer Vagabond Dog and Devolver Digital announce that RPG Always Sometimes Monsters will be available through Steam and the Humble Store this May 21st. It's also hands-on at PAX East.

The game "reflect parts of yourself" as you play, where we make hard choices as a "down-and-out character on the verge of collapse" as their one-true-love is marrying someone else.

Indie developer Vagabond Dog is behind an "unconventional RPG" by the name of Always Sometimes Monsters, which focuses on an "out of luck, out of money" protagonist looking to turn things around.

We'll "explore themes and issues" of the modern world while making decisions that affect yourself and others. Apparently our beloved is marrying someone else, so it's RPG time. 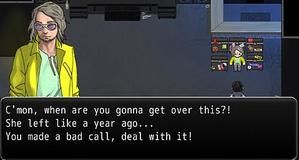