Episode 20 of Double Fine Adventure! documentary for Broken Age out

The last episode from 2 Player Productions has been posted as their behind-the-scenes development documentary with Tim Schafer's Double Fine comes to an end. They were following Broken Age from start to finish.

With EP20: "We Did Our Job" the series concludes and we get a final glimpse inside the studio post-release, "from a germ of an idea in Tim Schafer’s notebook to a finished game and beyond."

Tim Schafer has signalled the arrival of the "special backer preview" for Broken Age Act 2, which officially launches tomorrow. However those who backed the project get it today, alongside a poem.

The Double Fine big cheese recommends starting the game over to jog our memories of everything that's happened, and to snag achievements. This has been a "long and crazy journey" we've shared.

Double Fine have just announced that the second and concluding act of Kickstarter-funded adventure title Broken Age will release on April 29th in Europe.

From the day of its release onwards, Broken Age will only be available for purchase as a whole package, rather than in individual acts.

Double Fine’s Tim Schafer posted a video diary covering the ongoing development of the studio's adventure game Broken Age yesterday, and revealed that most of the work on the game is already done.

Key programming, dialogue writing and voice recording has all been completed, leaving the team to concentrate on testing and bug-fixing. In the same video, Schafer took the time to lend his support to Peter Molyneux, who's come under some close scrutiny in the gaming press in recent weeks.

Double Fine's concluding act to Broken Age will be coming this spring, but so will a physical copy in those things historians tell us are called 'non-digital-based product outlets', or 'shops'.

Nordic Games is behind the retail endeavour, and they're particularly happy with the "new German voice-overs" for mouse-clicking adventurers. 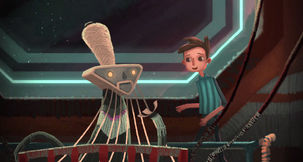