FireFly Studios' real-time strategy and colony building sim - Space Colony - is once again launching, and this time it's with the Steam Edition. It's a "remastered version" of the game exclusive to Steam and gets its own campaign.

There are also achievements, trading cards and Steam Workshop for mods. It also supports much higher resolutions to help spot trouble early. Now, do you build for peace... or war?

Stronghold developer Firefly is clearing the space dust off their 2003 sci-fi strategy simulator. Space Colony HD will be all systems go next month as we get busy building intergalactic settlements.

It's our job to keep our "ragtag crew of colonists alive and content." We'll have to stave off alien attacks as we litter colonies across the stars. It's a complete HD overhaul supporting 2560x1600. 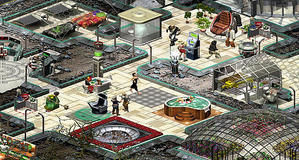