Ubisoft is releasing a comic called 'Splinter Cell: Echoes' to explain how Sam Fisher gets roped into saving the rear political end of the US once more. The 88-page comic starts with Fisher 'enjoying' retirement.

It explores the relationships in Fisher's life, like between him and his daughter. His past actions have "resonated and echoed forward" and this comic leads into Blacklist.

Ubisoft creative director Maxime Beland reveals that Blacklist takes place just 6 months after Splinter Cell: Conviction's storyline, and that the team will build upon its successes.

They have carefully scrutinized reviews of Conviction so they can gather a consensus on what did and didn't work - it's a "sweet and sour" experience said Beland. Blacklist arrives March 2013.

Ubisoft "thrilled and kind of amused" of leaked 2012 line-up, it's "inaccurate"

2012 will see Assassin's Creed 3, Splinter Cell: Retribution, a new Brothers in Arms, Prince of Persia and Just Dance? Probably not as the alleged 'leaked schedule' is "inaccurate."

It shows gamers are "anxious to hear about" Ubisoft's line-up, and they're "thrilled and kind of amused" by it all. Sadly it's not true but we'll hear "directly" from Ubisoft soon for fiscal 2012-13.

The official Ghost Recon Twitter feed as revealed that players may join the Ghost Recon: Future Soldier multiplayer beta in January next year. 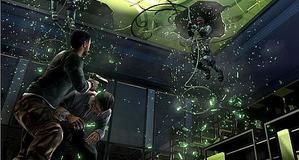