In a recent interview with IGN, Robert Kirkman (creator of The Walking Dead) discussed details of the upcoming Telltale’s The Walking Dead Season Three. Fan favourite, Clementine, will be returning in some form (most likely as an older character).

The exact quote about Clementine as said by Kirkman (5:27 in the video): “We’ll be checking in on Clementine again, so we’ll be seeing her, where she is at and what’s going on with her”.

The Walking Dead: Michonne reaches its conclusion next week with season finale "What We Deserve"

Originally kicking off back in February, Telltale Games have confirmed that The Walking Dead: Michonne, the standalone spin-off story of their The Walking Dead parent series will conclude next week with the third episode finale titled "What We Deserve".

Interestingly, the stakes seem to be pretty high for this final episode with Telltale Games stating that it will have players "feeling the weight of choices both recent and long ago," as Michonne’s actions will have players decide "who lives, who dies, and what redemption really means in a world gone to hell."

Telltale Games has announced that the first game of their Walking Dead "miniseries" starring Michonne will be arriving on February 23rd. The first episode is titled In Too Deep, which takes place during her absence between issues #126 and #139 of the comic book.

The Walking Dead: Michonne slated for reveal on The Game Awards

Telltale Games has been teasing the release of The Walking Dead: Michonne for some time now. With Season 1 of Telltale's episodic adventure adaptation of Game of Thrones wrapped up, the studio is turning its attention fully towards the miniseries, and today it was announced that we can expect a reveal tonight on The Game Awards 2015.

The Walking Dead: Michonne will be available shortly

It's been awhile since we heard anything about the mini-series spin off games that were to feature the samurai sword-slinging survivalist of The Walking Dead series, Michonne. Well, according to a few tweets from Job Stauffer, Head of Creative Communications at Telltale Games, it may be coming out very shortly. 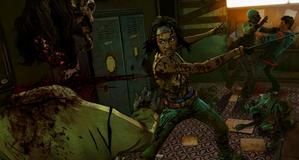